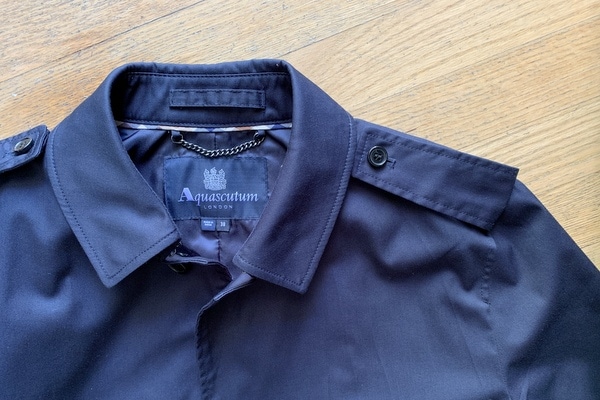 Burberry trench coats are gorgeous but they are also terribly expensive. For a more affordable trench or mac, try these stylish alternatives to Burberry for women and men on for size.

In search of affordable alternatives to Burberry

I love the look of a belted raincoat. It can be worn for work and on the weekend and is a perfect transition piece for autumn and spring.

I particularly like the look of the raincoats and trechcoats on offer at iconic British retailer Burberry.  Unfortunately, I cannot afford the $1,990 or more that Burberry trench coats cost at retail.

Often it has been hard for me, based in the United States, to find options beyond spectacular-yet-pricey Burberry rain jackets. (When I have a chance to explore menswear shops in London, trench coats and macs are a lot easier to find.) So I’ve been on a search for affordable alternatives to Burberry for a while now.

Over the past several years of research, I compiled the list below of trench coat options from among dozens of interesting fashion brands for men and innovative clothing brands for women that I’ve followed.

But, before I get to the list, the first question I wrestled with was, what kind of raincoat should I get? A trench or a mac?

What is the difference between a trench coat and a Mac?

Formal rain coats tend to fall into two different options: a belted trench coat with all of the military-inspired trimmings or a simple Mackintosh rain coat.

A mac coat generically refers to a plain, button-down raincoat, while a trench coat features military-inspired details including a thick waist belt, shoulder and wrist straps, and large lapels.

Let’s briefly explore the differences between a mac and a trench coat before diving into suggestions for some alternatives to Burberry from innovative fashion brands.

About the mac (aka Mackintosh) raincoat

The original Mac jacket was named after Scottish innovator Charles Macintosh, who developed a way to rubberize cotton in the early 19th Century. Over more than 200 years, the Mackintosh (a K was added to the name along the way) raincoat became so ubiquitous that its name became generic.

Much like “xeroxing” has come to generally refer to copying or “kleenex” is used interchangeably with tissues, the term “mac” is now used by many different companies to refer to, in essence, a simple, button down raincoat.

Most rain jackets described as macs are single-breasted and feature a series of buttons. Some macs have a hidden placket that conceals the buttons underneath (though I personally prefer the buttons to be visible). Mac jackets tend to lack adornments like a belt, epaulets or wrist straps that are more characteristic of trench coats.

About the trench coat

The trenchcoat might best be thought of an iterative innovation on the traditional mac raincoat. In the 19th Century, British innovators Aquascutum and Burberry developed their own waterproof fabrics and raincoats. Both also developed strong relationships with the British military and individually with its officers. As the nature of war changed, the British military required a lighter, waterproof coat to wear in the field.

Aquascutum and Burberry listened.  The two companies developed the first trench coats for the military, which we used in the Boer War and World War I. Both companies lay claim to inventing the first trench, though Burberry has the advantage of being able to point to a 1912 patent for a Tielocken, which features similar details to the modern trench coat including a belted waist and wide lapels.  (If you want to explore the military origins further, the Smithsonian Magazine takes a really fascinating deep-dive into the history of the trench coat.)

The modern trench coat tends to feature more detailing than a mac coat.  These details tend to include belt straps and a thick waist belt, covered pockets, epaulets and d-rings at the shoulders, thick, wide lapels and large, detailed buttons.

A number of iconic and innovative fashion brands offer Burberry dupes for macs and trenches for both men and women:

Entrepreneur Andreu Fernández founded menswear brand Hockerty in 2008 as Tailor4Less. Try Hockerty for a custom-tailored trench coat for men from just $269, where you can customize the length, colors, buttons, single vs. double breasted look and fit.

In 2013, Fernandez launched Sumissura, a custom tailoring line for women.  Visit Sumissura to get a custom-fit trench coat for women from just $219.

Asos was founded in 1999 by two Brits, Nick Robertson and Quentin Griffiths. The acronym ASOS stands for “As Seen On Screen,” reflecting the founders’ desire to emulate looks for men and women seen on celebrities and in cinema.

As you might expect for a British brand, Asos delivers a series of super-affordable trench coats for men and attractive trench coats for women, many of which are under $100, including double-breasted, single breasted, and belted options. (Don’t expect the same materials or finishes as Burberry at this price point.)

COS, a fashion concept launched in 2007 under H&M by its Swedish CEO Karl-Johan Erling Göran Persson, focuses on minimalist fashion basics and is a step up in price from H&M’s fast fashion pieces. Cos tends to carry a handful of trench coats for men like a linen bonded mac and lightweight cotton trench, and minimalist trench options for women like a belted duster coat and a long organic cotton mac.

COS’s trench coats cost around $250 for both men and women.

UK-based Peregrine makes an attractive bonded mac for men as well as plenty of trench-like raincoats and parkas for women.

Founded by the son of former J Crew CEO Mickey Drexler, Alex Mill can be a great alternative to Burberry for trench coats for men and women, though their selection of trench coats  ebbs and flows.  They used to offer a balmacaan jacket for women, which looked an awful lot like a trench, as well as a Greene Street trench for women and a cotton tech trench coat for men. Those options are long-gone, but the company offers, as of this writing, a Gene trench coat for women.

Japanese fast-fashion retailer Uniqlo can be a solid alternative to Burberry for very affordable trench coats though their inventory and priorities come and go.  Uniqlo used to offer a flashy, wide-lapel, double-breasted trench for men and a similar option for women, but both are no longer in stock. Browse Uniqlo’s current options for trench coats for men and women online.

British brand Boden launched in 1991 with line of men’s clothing, but today is predominantly oriented towards women.  Boden offers a Mac coat for men and several trench coat options for women.

Longtime Dodgeville, Wisconsin-based catalog retailer Lands End tends to have a surprisingly robust selection of belted trench coats for women, including long coats and cropped trenches.  While, at the time of this writing, Lands End does not stock a traditional trench for men, they have a number of rain jackets and car coats for the guys.

Aquascutum is, or perhaps was, an iconic British brand founded back in 1851 on Regent Street in London. Their womenswear line began in 1900 and was adopted by British suffragettes. Up until recently, and despite a number of ownership changes and some financial troubles, Aquascutum remained one of the best affordable alternatives to Burberry for military-inspired trench coats for both men and women. The company offered a wide range of styles including double breasted coats, belted trenches, hidden placket models and more. Sadly, Aquascutum went into administration (again) in September 2020, and liquidators were appointed in April 2021.  In September 2020, Trinity Limited entered into a licensing arrangement with Aquascutum, whose products now appear to be available only in China.

Several additional brands offer even more choices for affordable alternatives to Burberry for trench coats and macs for men:

British menswear brand Percival prides itself on “subverting the classics.” At $299, Percival’s Waterproof Sherlock mac coat is an excellent affordable alternative to Burberry. You can also shop Percival via Thread, which offers free shipping over $100 and free returns to U.S. customers.   (Get a $30 discount off of your first Thread.com order with this link.)

Jacob Hurwitz and David Neill founded American Trench back in 2013 in Philadelphia to offer a made-in-America trench coat. The entrepreneurs offer a classic and remarkably affordable American-made trench coat in navy and khaki.

Bonobos is one of our favorite innovative menswear brands for their stylish fit, colorful approach to a man’s wardrobe and the service and integration they provide between their online platform and series of guide shops.  They don’t offer a wide range of trench coats, but their hidden placket, single-breasted trench for men is a good option.

They call them raincoats, but Charles Tyrwhitt offers a small and affordable selection of macs and trench coats for men.

Founded by Thomas Harvie and George Hudson in 1949, Harvie and Hudson has added flair to London’s Jermyn Street for decades with their signature, colorful H&H stripe. The company offers a simple and extremely affordable single-breasted luxury waterproof mac in beige and navy.

Netherlands-founded menswear startup Suit Supply pushes the envelope with impeccably-tailored, slightly-flashy men’s suiting and casual wear. They offer a range of bold cotton trench coats for men that will make a statement.

New York fashion entrepreneur Todd Snyder is one of our favorite elevated alternatives to J. Crew for men. Through its flagship store on Madison Ave in New York City and online, Snyder sells a range of envy-inducing tuxedos and suits, casual button downs, denim, accessories and more.  Todd Snyder sells a gorgeous made in New York reversible trench, which doesn’t come cheap, and a more reasonably-priced khaki trench.

Private White VC is “the last remaining clothing factory from the world’s first industrial city,” Manchester in the United Kingdom. The company makes “Made in Britain” macs and trenches starting at under $700 as of this writing.  I particularly like the timeless Ventile Mac 3.0, the company’s signature single-breasted cotton raincoat, which is the “cornerstone” of their operations.

Look to the following brands for trenches for women (but not for men):

Blogger-turned-entrepreneur-turned-style icon Arielle Charnas first launched her blog and then her own fashion line in collaboration with Nordstrom.  Her collection, available via Nordstrom, includes a number of unique and attractive trench coats, including this gorgeous elongated lavender trench.

Ethical apparel startup is another one of our favorite brands for men, though they also specialize in elevated basics for women.  Their double-breasted, belted Drape Trench Coat is an extremely affordable alternative to Burberry. Unfortunately, the company doesn’t make a similar option for men.

How much do Burberry trench coats cost?