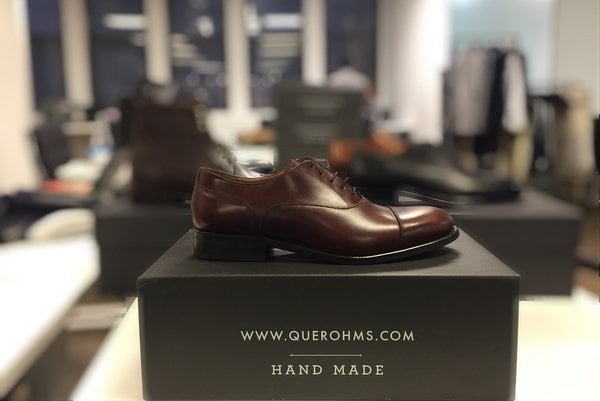 Modern Fellows sat down with Derek Tian, one of the co-founders of online custom tailor Black Lapel, at the menswear startup’s showroom on a recent visit to New York City. Derek spoke about the upcoming launch of a collaboration with Spanish-made shoe brand Quero and how to serve customers in a time of change for retail.

Black Lapel just announced that it is partnering with startup Quero to offer its customers Spanish-made dress shoes and boots, enabling the New York suit supplier to offer a new product category to its customers.

Quero first came to the attention of Black Lapel’s founders when a couple of their team members who owned pairs spoke highly of the brand. The company developed a relationship with co-founder Randy Shuken who, along with co-founder Monica Shuken, works with factory owners Antonio and Juan Carlos to produce their line in Albacete, Spain.

Black Lapel will start by offering several of Quero’s off-the-rack models, including a cap-toe oxford and double-monk strap for $255, and Chelsea boot for slightly higher. The additional exposure should also help spotlight one of Quero’s unique features — the ability to customize your own pair of shoes — to a receptive audience.

For Black Lapel, their partnership with dress shoe startup Quero is an opportunity to serve their customers in a more comprehensive way, according to Derek, who points to the strategic framework conceptualized by Clayton Christensen, a Harvard Business School professor, and colleagues in a 2007 article for the Sloan Management Review, about focusing on The Job to be Done.

This customer-centric approach to product development is pushing Derek and his co-founder and business development team to think more broadly about the ways in which a company like Black Lapel can better serve its core client through new products and potentially services. Another feature evident since Modern Fellows’ first conversations with Black Lapel in 2012 is the company’s methodical focus on iterative innovation. The company does not drift wildly through new product categories or frequent changes to branding.  It sticks to its knitting but meticulously surveys customers and menswear enthusiasts about their preferences and pain points, tests new technologies and product offerings, and seeks to better serve their customers over time through new collections and process improvements.

This focus on testing and iterative innovation has led the company to develop a “small batch” approach to new product lines, buying smaller orders of fabric to test demand through limited runs.  Last season, Black Lapel debuted small batch cotton suiting, which did well enough that the team brought it online as a regular offering.  This season, Black Lapel is featuring small batch blazers for fall and winter.

Topcoats have been another success for Black Lapel, though the 2018 model has undergone substantial revisions from the prior year model, the result of extensive consultations with their customers.  The design team discovered there was too much waist suppression in the topcoats, whose cut had been modeled on their suiting line.

For 2018, the company rolled out a new silhouette and fabric enhancements using their top-of-the-line Savoy fabrics.  Next year, Derek suggests they will offer a selection of topcoats featuring their work-horse fabrics as well.

While the company tries to make it as easy as possible to take measurements — and offers a generous returns policy — Derek observes that “there’s a mental hurdle” for some potential customers when they get to the part of the process that asks them for measurements.

Stay tuned for more process improvements — and product releases — in the coming months and years.