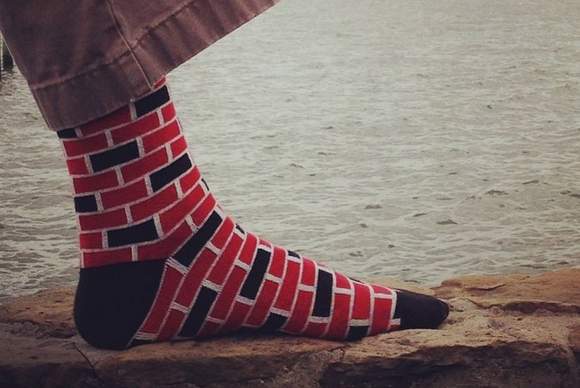 Modern Fellows caught up with entrepreneur Brad Christmann, who took his Washington, DC-based sock venture Boldfoot live this week and quickly surpassed his initial fundraising target. Brad, a District-area native – he grew up in Silver Spring – has been fine-tuning the concept and construction of his line of colorful men’s socks for the past year and a half.

Brad provided the funky, American-made red-brick socks pictured above at no cost for review, and spoke to Modern Fellows about the challenges of lining up manufacturing partners as a startup, his focus on philanthropy, and how Boldfoot differs from the growing crop of interesting sock choices out there.

Boldfoot launched on Kickstarter on June 9. Grab their socks via their website or check out the great selection of Boldfoot Socks at Amazon.com

I’m a marketer by trade. I never considered starting a company until graduate school [at UNC] opened my eyes to the world of entrepreneurship.  We only have a finite amount of time on this earth to explore our passions, and that window has a giant clock attached to it that is counting down to zero.

What has the initial process been like as you set about designing and manufacturing?

This project has been a year and a half in the making. I was given the run-around by a three other manufacturers when I was trying to get up and running, often working with them for several months before they informed me that they were too busy to work with a small startup. A bit frustrating, but perseverance pays off!  The manufacturer I’m currently working with was the first one I contacted, only to turn elsewhere because their manufacturing minimums were a bit high. Once I realized that Kickstarter was an option for pre-orders, I decided to go back to the original manufacturer, which is located just outside of Philadelphia. I do all the designs myself. I’m by no means a professional designer, but I know enough to be dangerous. At this point, it’s 100% bootstrapped, and I aim to keep it that way. This is the ultimate test for me.

How do you differentiate yourself from what seems to be more competition in socks now than several years ago?

It’s getting crowded out there, but I think our sock insurance program, Veteran philanthropic focus, and commitment to American manufacturing will go a long way. In the end, the success of any company boils down to two things, execution and quality products. You can have the greatest idea in the world, but it means nothing if you can’t execute, and I pride myself on adopting lean startup ‘test and learn’ principles, making sure not to over-invest in anything until I know it will be successful.

What role does philanthropy play in your business?

I firmly believe that no business should exist purely for profit. I knew when I set out to launch the business that it would have a higher purpose, and after doing some soul-searching, I chose to help Veterans in need. One of the inspirations in my life is my grandfather, a 97-years-young WWII Vet, Purple Heart, POW… the man has done it all. And while he went on to have a successful career as a doctor here in DC, far too many soldiers today aren’t quite so lucky.

There’s no greater tragedy in my mind than a soldier who goes out to battle, only to come home to a difficult re-acclamation to society. Here are a few astounding stats- 1/3 of adult homeless men and nearly 1/4 of all homeless adults have served in the armed forces, and upwards of 200,000 Veterans are homeless on any given night. We can do better to repay those that have sacrificed to protect our freedom. While a donation of $1 per pair isn’t much, every little bit helps.

What does success look like for you and Boldfoot in 3 years? Where would you like the company to be?

My goal is to build the best sock brand in the U.S. I realize that sounds audacious, and more bluntly, a bit absurd, but I don’t think anyone should settle for a company that’s “good enough.” After all, no consumer is looking for a product that is “good enough;” they want the best, and I hope to give it to them.

We may not be there in 3 years time, but hopefully we’ve expanded the product line (children’s, athletic, etc.), established some retail relationships and more importantly, helped thousands of consumers understand the importance of buying American-made.

There’s a 1.7x multiplier when someone buys USA-made, meaning for every $100 spent on USA-made goods, $170 is re-invested in the U.S. economy. Despite this fact, just 3% of all clothing sold in the U.S. was actually made here. I’d be quite proud if I could inspire even a few thousand Americans to purchase more USA-made products.