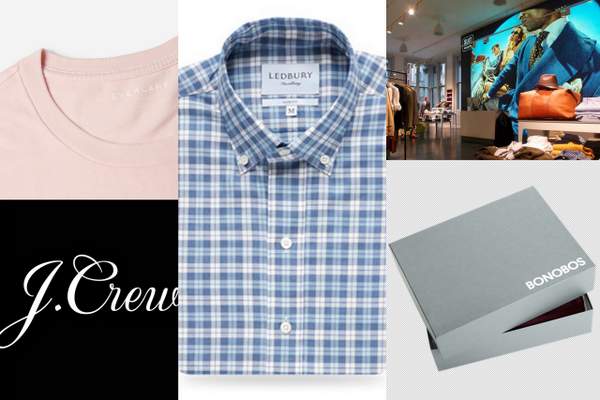 Men deserve better than a generic department store gift. Here are 5 amazing direct-to-consumer menswear brands who offer a wide variety of unique gifts for the holidays:

One of Modern Fellows’ top menswear shops, Richmond-based Ledbury is good value all year round. Around Christmastime, there are good deals to be had on unique and great-fitting shirting and a range of gifts for men.

We’ve raved in the past about why Nordstrom is head-and-shoulders above most of its competitors. It’s a department store for the digital age that carries a range of up-and-coming designers and brands including Bonobos, colorful socks, original sweaters, slim-but-not-skinny ties and much more.

Founded in 2011 by then 25-year old engineer Michael Preysman, Everlane promotes “radical transparency” in its supply chain, providing some visibility into input costs and the workers behind the clothing. (On Black Friday, Everlane donated profits to help improve the lives of workers at its factories in Vietnam.) The company makes quality men’s wardrobe staples including soft t-shirts, super-comfortable cashmere crew and v-neck sweaters, fleece pants, backpacks and a natty wool overcoat for under $300.

Bonobos launched as an online-only brand in 2007 as the brainchild of Stanford Business School classmates Andy Dunn and Brian Spaly. While it began with a focus on chinos, the company today carries a range of menswear staples including sweaters, button down shirts, suiting, neckties, cold weather accessories and denim.  Several years ago, Bonobos began opening a series of storefronts called Guideshops that help customers get a better feel for their products (and if you live near one, you can go scout out potential gifts in person)

House of Fraser is a delightful British department store that is worth a visit whenever you’re in London. Their online shop, which ships internationally, is also worth a look for British takes on ties, accessories, shirts, suiting and knitwear.

J Crew has had its ups and downs over the years, but is back on the upswing with a refreshed line of casualwear and amazing Ludlow suiting. The company is also focusing on a line of cozy menswear-only stores, including a new outpost on 14th Street NW in Washington, DC.

Netherlands-based Suit Supply frustrates with overly-pushy staff who attempt to up-sell you at every turn, but you can’t argue with their aesthetic, which pushes the style envelope. Flashy suits mingle with a variety of stylish ties, dress shirts, shoes and accessories that will keep you going back for more  long after the holidays are over.