Paul Winston’s ties are a throwback to an earlier time. From his modest website — Chipp Neckwear — and New York City storefront he sells silk grenadine and madder ties, as well as “unapologetically cheeky conversation piece” neckwear, at prices you would be hard-pressed to find elsewhere in this day and age.

The man behind the ties is also somewhat of a throwback. Paul remembers how things were back in the 1950s, when he joined the business with his dad and retailers were content to get a keystone markup.

Paul sent over a muted yellow grenadine tie, pictured below.  For 60 bucks, it’s a spectacular bargain – solidly and carefully constructed by hand with a clean finish — though at a width of 3.25 inches, it’s a little wide for my frame and, as Nouveau Vintage notes, “there’s no way around it, the knot is huge.”  Still, even if you have to send it to Tiecrafters to slim it, the tie remains a solid-if-not-unheard of value. (Note: When I first interviewed Paul and wrote this piece back in 2014, the ties cost $50.  The fact that he’s only raised prices by $10 in the ensuing years is a testament his ethos and the value of the ties.) 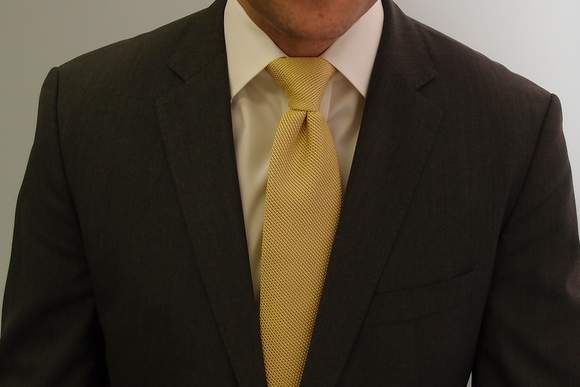 The grenadines come in a nice variety of colors. (Paul notes that if one color is temporarily out of stock, it usually comes back pretty quickly.)

His conversation piece ties — which are not handmade — require a little bit of thought and are “unapologetically cheeky,” according to his website.  Below is one of his favorites, for which he has a pretty good story that you’ll have to get out of him yourself. 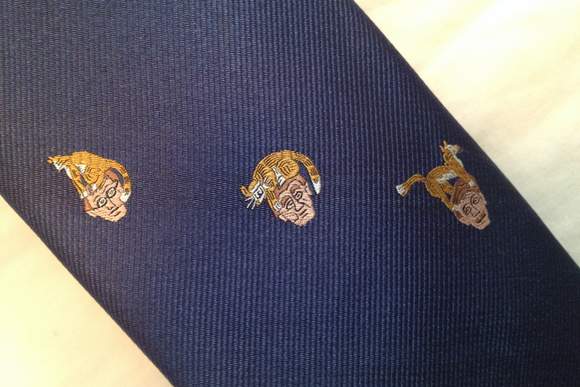 Paul says he’s working just to keep out of trouble, but he also keeps experimenting. He is about to start producing solid madder silk ties and dip his toe in the bow tie world.  And while he may be a bit of a throwback, he boasts a solid, well designed website with detailed photos, and his ties have attracted a number of digital fans from the Fine Young Gentleman to Putthison.

A guy that has been in the business for more than 50 years deserves to tell his own story. So here is Paul Winston in his own words, from my 2014 interview with him: 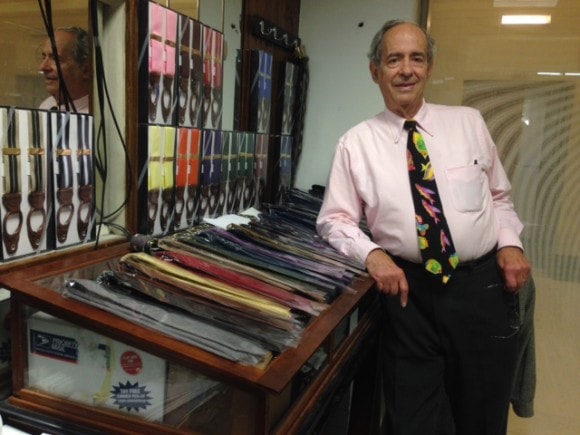 In his own words: Paul Winston

Because i’m older, i know what prices were. When I joined the business, retailers got a keystone markup. Today, that’s unheard of.

I’m working to stay out of trouble. I don’t have a private plane and a yacht. I’m doing what I think is an exciting amount of business.

My son built my little website. The first day that that site was up — we didn’t tell anyone that it was up — we got 150 orders for grenadine ties.

Someone comes to me and says we can double your business. I say thank you very much but I can’t handle it. I do all of the shipping myself. I have people who make the ties by hand.

The silk for my ancient madder ties — I buy it from the same mills that [the expensive luxury neckwear brand] Drake’s does.

My price is better than good, though I can understand that as good a price as it is some people would say that’s too much to pay for a tie.

When i joined my dad in the 1950s, the idea of a banker or a lawyer not wearing a suit, let alone a tie, was unthinkable. I lay that at the feet of the digital world.

One of the first things my dad laid on me was that we’re not in the need business, we’re in the want business.

I sold my building in 1986, but we’re still making clothing. We make made to measure and bespoke clothing. For made-to-measure suits, we cut a pattern ourselves. It’s so sophisticated, most people don’t need bespoke.

We use nothing but good English cloth. There are a handful of good mills left in England and everyone knows who they are.

The common thread among all of my customers is that they are immensely secure in knowing what they want.

There’s no rights and wrongs in clothing anymore.

2 thoughts on “Review of Chipp Neckwear: For $60, Paul Winston’s Handmade in New York Grenadine Ties are a Spectacular Bargain”