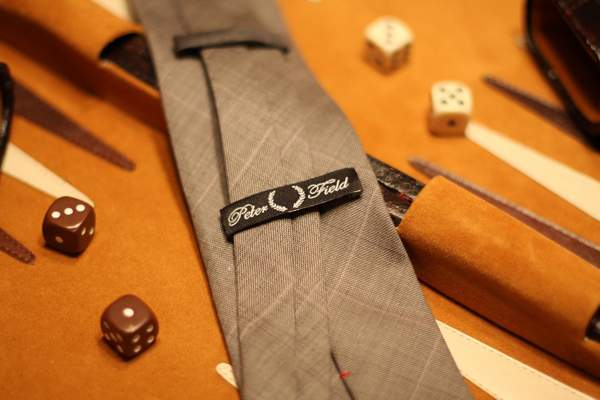 The playing field of custom neckties is not totally unoccupied: Thailand-based Sam Hober has been around for years and offers a variety of fabrics that they can make in specific lengths, and widths and with a range of custom design and construction options for around $80. A handful of retailers such as The Knottery offer neckties in multiple widths.  Others like Skinnyfatties will tailor a pre-existing tie to a specific width. If you have the cash, Drake’s of London will tailor a bespoke tie for around $235.

Nicholas is looking to build something slightly different has a real opportunity to differentiate Peter Field. His proposition is to offer a customized tie made in America via a streamlined ordering process for around $60.  As with many startups, there are a number of moving parts and decisions yet to be made, but what he has developed thus far looks promising.

Right now, most of his energy is understandably focused on his Kickstarter campaign.  There will be other questions to answer going forward, like how to scale up manufacturing, what patterns to choose for a new run — and on that, it would be nice to see a couple of simple plain or textured offerings in the mix — and balancing the amount of customization with a simple ordering process.

For now, the interview below, conducted over email, provides a window into Nicholas’ journey thus far, from learning to sew to building trust with fabric suppliers and how he wants to develop his American manufacturing operations.

Take me through the venture from concept to Kickstarter.  What’s your background, what made you finally put your idea into practice, and how long have you been at this?

The original inception of Peter Field was just over 2 years ago in January of 2011.  I was pretty frustrated with the way clothing fit my build and started diving into tailored and bespoke clothing.  I decided at that point to start making my own pieces because everything else was too expensive.

My background is in economics, finance, and logistics, so I pretty much had to start from the ground up when it came to sewing.  I worked in men’s retail through college so I had a good idea of where I wanted to take Peter Field.

Originally I hired a seamstress to handle the manufacturing but wasn’t quite getting the product I wanted.  I realized that the only way to move forward was going to involve developing an entirely new process myself.  So I bought a sewing machine and taught myself to sew.  I bought my first sewing machine at a JoAnn Fabrics and got some pretty funny looks from other customers because I looked slightly out of place as a 25 year old man.

The initial plan was to bootstrap the entire company while contributing what I could from my pay check.  I first heard about Kickstarter a few months after creating Peter Field and fell in love with the concept.  I had been deciding how to approach my own project for far too long and then finally took the plunge.  It has been a great experience thus far and I plan on launching more ideas from the platform throughout the year. 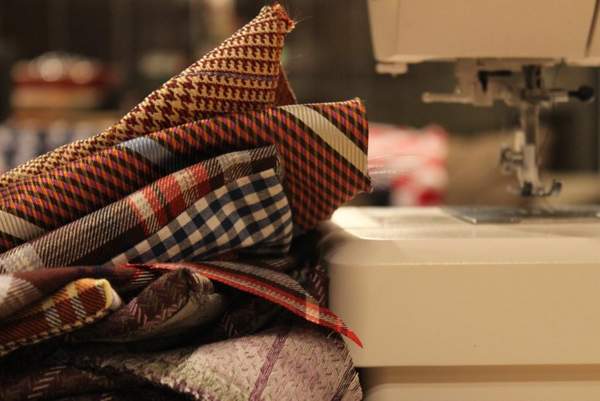 How steep was the learning curve in terms of sewing and starting a business?

Writing business plans is sort of a hobby, so the learning curve for starting a business was not bad.  I spent the last several years building relationships [in the fashion industry] so my network has helped a lot.

When it comes to sewing the curve was a lot steeper.  I was raised in a hardworking family though, so I have a kind of “find a way” mentality that pushes me.  A lot of the learning process for sewing came down to hours of trial and error.  I would put my headphones in and try new strategies until I got what I wanted.

I also leaned on my mother and other relatives who have been sewing their entire lives; they’ve been a huge resource and can typically point me in the right direction.  Growing up, I was always artistically creative, and had a sense of design instilled in me from a young age.

How are the ties constructed, where are the fabrics sourced from, and how did you go about finding the fabrics and building relationships with your suppliers?

Peter Field ties are created with a traditional 3-piece style using many different silk, wool, cotton, and linen fabrics.  We also use an Italian wool interlining specifically created for ties to create the thickness.  Our ties are tipped on both ends, and this is one part of the tie we like to add a spark to by using both complimenting and contrasting fabrics.

Sourcing fabrics and building relationships with suppliers has been the greatest challenge.  There is a level of skepticism with suppliers when they work with someone new.  It took a few tries to understand what I needed, so there were definitely some growing pains.  I started with local fabric shops, then on to trade shows in Chicago.  Eventually I took a trip to L.A. and a couple to New York.  It took about a year and a half to get a handle on everything, but now I have great relationships with several suppliers and we are looking forward to growing our business together.

While I’d love to source all fabric from the U.S., it is difficult.  Forty or fifty years ago things would have been different, but now there are not many mills still in business due to competitive manufacturing pricing overseas.  I’d love to see this trend reverse over the next decade.  Currently most of our silk comes from Asia.  We push for wools and cottons from the U.S. but lean on European mills often.  Our tie interlining is from the heart of Italy.  As Peter Field scales, I would like to use our size to push for more American manufacturing.  After all, it’s part of our mission. 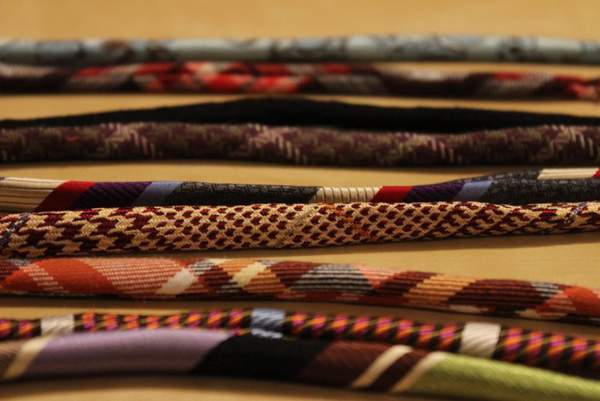 Lengths are 100% custom and up to the individual; everyone gets what they want.   We could ultimately create any width but have decided to stick with a set of three for the purposes of the Kickstarter project and our online store: traditional (3.5”), modern (3”), and skinny (2.5”).

We have found that every guy wants a different look.  That’s the beauty of our ties – they are custom. The biggest differentiator that we offer with a handmade tie over a machine made tie is the shape.  We actually create a one of a kind pattern for each tie produced before the fabric is even cut.  This process takes the overall length and the width of the tie into consideration so that the tie is as wide or narrow as necessary where the actual knot is tied.  Whether you are tall or short, or want a skinny or wide look, the tie will be proportionate to the individual.

One of your emphases is American-made.  From the Kickstarter video, it looks like manufacturing mostly falls on you right now.  Assuming Peter Field takes off, how would you scale-up manufacturing?

Right now I do almost everything, including 100% of the sewing, web design and photography.  I have a small team that helps with Peter Field’s online presence.

American-made is a promise, and the custom process is so specific that we will keep 100% of the production in-house.  In terms of ramping up, the first step will be moving to a new and larger work space and outfitting it with the machines and tables necessary for an efficient production process.  There is also an entire workforce out there right now looking for “light manufacturing jobs.”  We already have a few candidates in the pipeline and are excited to create positions for them. 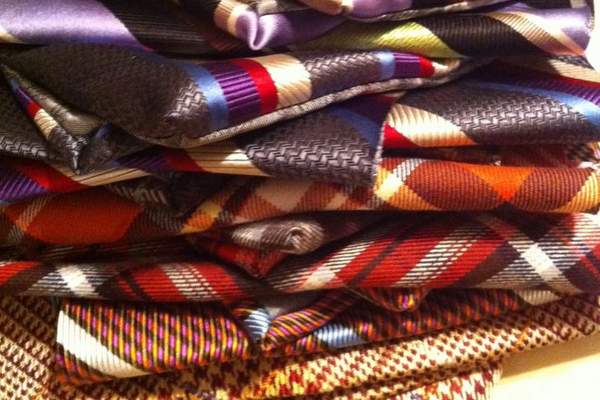 Where realistically would you like to see the company in the next 3-5 years? Manufacturing in-house in Chicago, elsewhere, with more tailors? Selling direct to consumers? In boutiques around the country?

We are always looking to the future and have some big ideas that we will roll out throughout the next couple years.  Ideally, in the next 3 years, Peter Field will ramp up to a team of 20 tailors and seamstresses exclusively creating custom pieces.  We will have a retail store attached to our workspace, along with a separate creative space to collaborate with other designers.  We want to make custom pieces and help to grow the fashion community; we will build the manufacturing foundation around this goal.

Great prices means staying out of the traditional retail outlets.  We are not big box and don’t want to pretend we are.  We currently have no plans to move in that direction.  Selling directly to our customers will allow us to avoid the retail markup and pass on the savings.  We are going against the status quo and want to build a new way to purchase clothing – not replicate what is already out there.

I’d argue the system can be better. 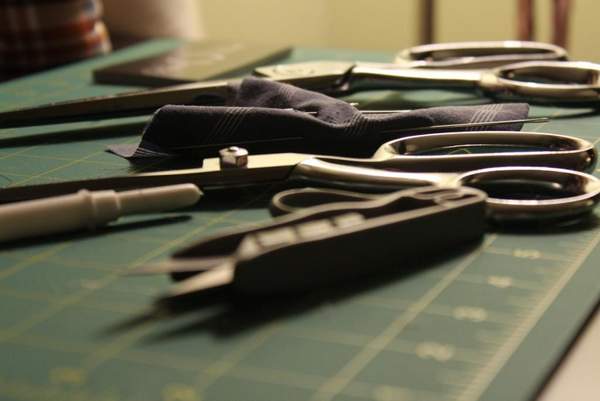