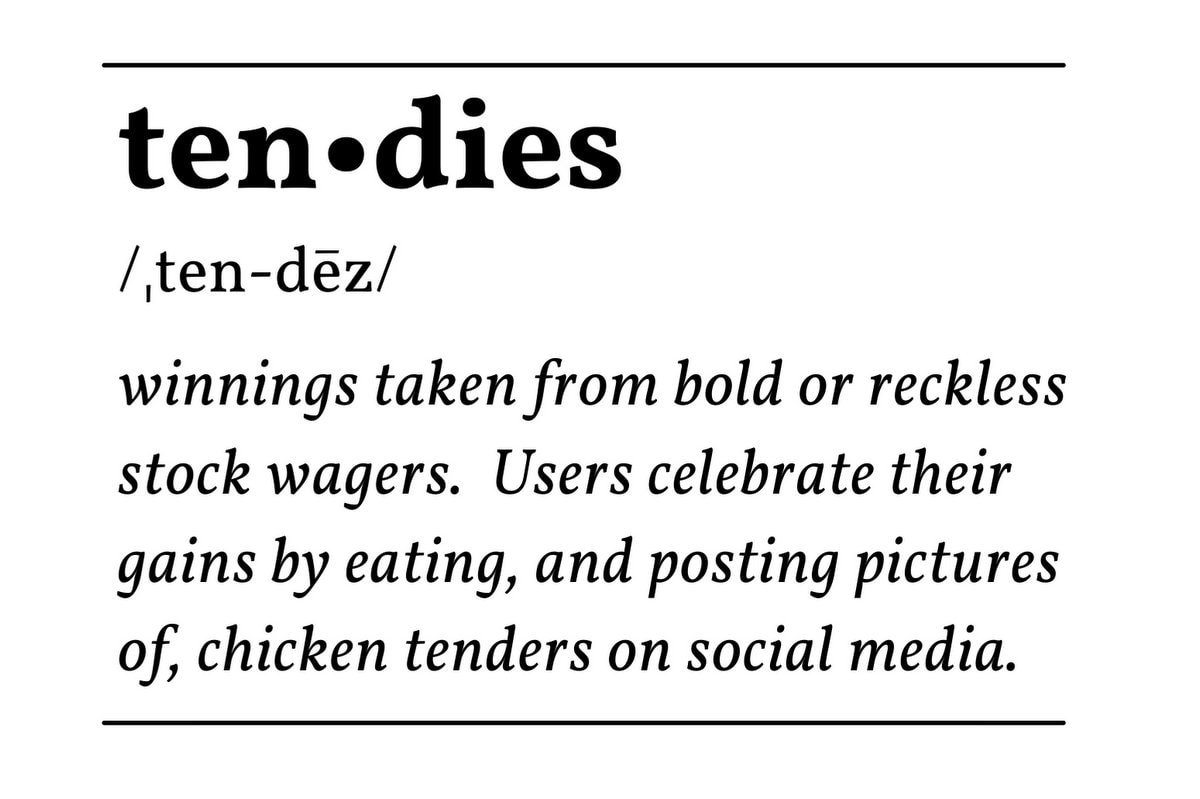 Confused about Reddit’s crypto and stock slang? Find definitions for DD, FUD, stimmy, stonks, tendies, YOLO and other shorthand and slang popular with cryptocurrency enthusiasts and the wallstreetbets crowd powering the Gamestop and AMC stock mania.

There is a lot to digest from the unfolding drama over Gamestop, AMC, Blackberry, Nokia and other heavily-shorted stocks, pitting retail investors and the wallstreetbets sub-Reddit against a group of hedge funds and Wall Street insiders.

The community has a language — often crude, offensive and indecipherable to outsiders — and culture all its own, swapping charts, DD and swears, emojis of diamonds and hands and photos of chicken tenders.

Before jumping in, if you’re curious to try Robin Hood, the investing app at the center of much of the excitement and controversy, it’s quick and easy to set up an account. Open an account at Robin Hood and get a free stock as a welcome bonus.

Here is a glossary of internet slang terms popular on Reddit’s wallstreetbets sub-Reddit and other stock and crypto forums.

I don’t condone the use of the terms below, which include slurs that are obviously offensive regardless of the context in which they are used. The definitions are my own based on my experience on the platform. Please feel free to contribute (constructively) to this article by adding your thoughts to the comments.

Autist – A slur intended “to describe someone that actually does due diligence and knows what they are doing,” but other times used to refer to someone who is uninformed, stupid or irresponsible. The term is also sometimes used as shorthand for a disclaimer. For example, a user appended his observations on recent SEC failed-to-deliver data with the disclaimer that, “I am an autist and not a financial adviser.”

BTFD is an acronym that stands for “Buy the F—ing Dip.” Users invoke the term to urge further buy into a stock that has recently declined in price. See the discussion about the philosophy behind BTFD in the investing sub-Reddit.

DD is an abbreviation for “Due Diligence.” The piece “$GME is a time bomb and it’s highlighting a severe vulnerability in the financial system” is an example of an in-depth DD post to the wallstreetbets sub-Reddit.

Diamond Hands refers to the practice of holding onto stocks amid volatility or price declines. Taylor Lorenz and Mike Isaac of the New York Times observe that, “having diamond hands is seen as a form of bravery, even if it sometimes appears irrational.”

FOMO is an acronym that stands for “Fear of Missing Out.”

FUD is an acronym for “Fear, Uncertainty or Doubt.”

HFs is an abbreviation for Hedge Funds.

HODL stands for “Hold On for Dear Life” (even when the price of a stock is dropping precipitously).

IANAL is an acronym that stands for “I am not a lawyer.”

A nocoiner refers to an individual who does not hold any cryptocurrencies and is skeptical of their value. One Redditor suggests that nocoiners are, “people who missed their opportunity to buy Bitcoin at a low price because they thought it was a scam, and who is now bitter at having missed out.”

Paper Hands or Weak Hands – The opposite of Diamond Hands.

Retards – A slur that means pretty much what you think it means. Some Reddit users employ the word as shorthand for “I’m not an expert.” For example, “I am a retard and may be wrong about this. Do your own [Due Diligence].”

Smooth Brain refers to someone who is stupid or uneducated. On Reddit, it is often used to refer to oneself or one’s peers. For example, “my polished smooth brain doesn’t know what is going on.” A bit of background: Human brains are made up of a series of folds and grooves known as fissures, sulci and gyri that increase the surface area of the brain, and cognitive activity, without adding to its dimensions. In real life, there is a rare and very tragic medical disorder called Lissencephaly, which translates to “smooth brain” and is “characterized by the absence of normal convolutions (folds) in the cerebral cortex.”

Stimmy is slang for “stimulus payment” received from the government in the wake of the COVID-19 crisis. Reddit users advertise spending their stimulus check on meme stocks and cryptocurrencies. As in, “I’m going to Yolo my whole stimmy in GME.”

Stonks is slang for stocks.

Tendies refers to winnings taken from bold or reckless stock wagers. Users often celebrate their gains by eating, and posting pictures of, chicken tenders. The tendies meme began on the anonymous image-board website 4chan and spans several social media platforms. According to Bloomberg Businessweek, tendies are known as “the treat an overgrown man-child receives for being a ‘Good Boy.'”

TLDR or TL;DR is short for “Too Long, Didn’t Read.” May be used to highlight concise takeaways in longer Due Diligence posts.

To the Moon is a phrase expressing hope that a stock will spike higher. As in, “hold $GME [Gamestop] to the moon.”

WSB refers to Wall Street Bets (r/wallstreetbets), the sub-Reddit that is driving the retail trading frenzy around GameStop, Blackberry, Nokia and other stocks.

YOLO is an acronym meaning “You Only Live Once.” Used to acknowledge engaging in reckless behavior or throwing caution to the wind. Reddit users posting to wallstreetbets can add a YOLO “flair” or tag to their posts.

Abbreviations for Gamestop, AMC and other trending /wallstreetbets stocks

There is another set of abbreviations with which you ought to become familiar if you are going to lurk in the wallstreetbets sub-Reddit. Many users will post stock ticker symbols without referencing the company itself, often prefaced with a dollar sign. (For example, $GME will be used to reference Gamestop Corp.)

Below is a list of stocks and exchange-traded funds (ETFs) that have been a subject of discussion on Wall Street Bets:

1 thought on “Stonks, Tendies and YOLO: A Guide to Reddit Stock and Crypto Slang”