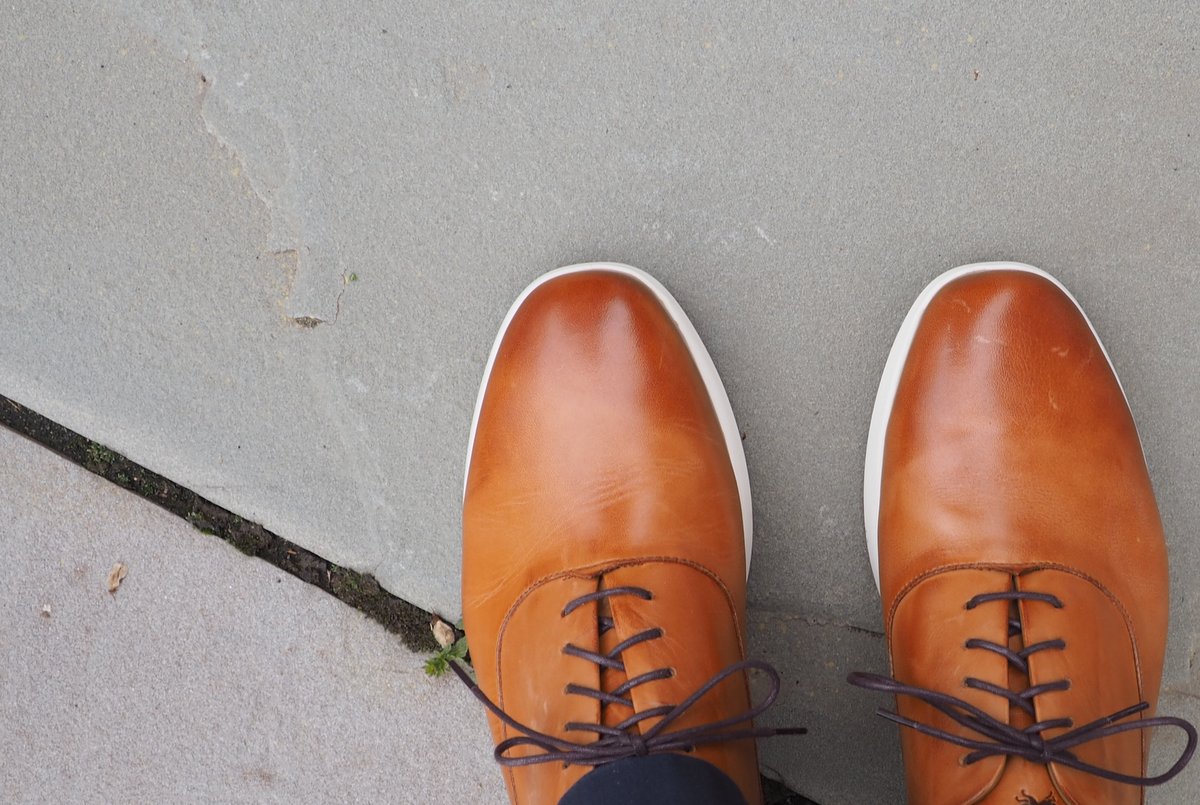 This review explores the comfortable and extraordinarily unique Longwing Crossover shoe (or should I say sneaker?) by Wolf and Shepherd. See why I think these hybrid dress shoes are a conversation-starter for business casual and smart-casual situations (and working from home walks).

What is a hybrid dress shoe or sneaker? In what situations would I actually wear them? Do I really need a pair?

These were some of the questions I asked myself when I set eyes on Wolf and Shepherd’s unique hybrid crossover shoe-sneaker for the first time.

Below I set out to answer those questions and explore why I think these hybrid dress shoes are unlike anything else on the market (and might deserve a place in your wardrobe).

Before I dive in, a disclosure: Wolf and Shepherd provided a pair of Longwing Crossover hybrid dress shoes to me at no cost for the purpose of a review.

The last time I checked, when I navigated to Wolf and Shepherd’s website, I encountered a pop up offering a 20% discount coupon off of your first Wolf and Shepherd purchase. (Let me know if it worked for you.)

What is a crossover or hybrid dress shoe?

Also known as a crossover shoe or sneaker, a hybrid dress shoe is a category of footwear that combines the formal look and design of a dress shoe with comfortable and relaxed sneaker components.

Hybrid dress shoes are designed to cross over between office and everyday situations, and to occupy the space between a dress shoe and sneaker.

Wolf and Shepherd’s Longwing Crossover is probably the best example of a hybrid dress shoe on the market today.

Sustainable fashion startup Allbirds makes what might be best described as hybrid casual shoes for women and men, featuring a thick sneaker sole and an interesting, casual shoe-like wool upper.

How much do Wolf and Shepherd’s Longwing Crossover hybrid dress shoes cost?

As of this writing, the Longwing Crossover hybrid dress shoes cost $289, according to Wolf and Shepherd’s website.

Wolf and Shepherd is a men’s lifestyle and fashion brand specializing in uniquely comfortable and versatile dress shoes for men. The company is a great example of the kinds of innovative, direct-to-consumer brands helping men dress sharp in the digital age.

Entrepreneur Justin Schneider founded Wolf and Shepherd in 2015 with the goal of creating the world’s most comfortable dress shoe.

Justin, pictured here with his wife and business colleague Hope holding the Longwing Crossover, began his journey a year earlier, experimenting by cutting up and manually gluing together dress shoe uppers and sneaker soles.

Those initial efforts led Justin to develop a working prototype of a dress shoe featuring an innovative foam sole.

From there, he identified a factory in Portugal and an Italian leather supplier, and perfected a proprietary, patent-protected foam.

In my review of those cap-toe oxfords, I wrote that,

They’re lightweight…and boast a bevvy of technologies in their multiple insole layers from high-density foam heel adapted from athletic shoes to carbon-fiber arch support and sheepskin lining in the upper-most layer.

All of that technology is housed in a pair of shoes that look professional and sleek with just a little bit of flair.

I have put that pair of Closer Cap-Toe Lace-Ups through the wringer over the past two years, and they remain in good shape and continue to feel great.

Justin told me in an April 2020 interview that, “we initially thought that our dress shoes would be for an older guy, but what we found from our customer data is that [a typical customer] is the 25-35 year old guy needs to impress.”

Those comfortable dress shoes, Justin observed, are a “a need product.”

Guys need a comfortable dress shoe for work, for weddings, and for Aunt Ida’s 80th birthday party. Wolf and Shepherd is one of a number of great options for dress shoes for men.

While the company incorporated performance elements of a sneaker into its dress shoes, it did so discreetly. Their dress shoes still look very much like dress shoes.

The Longwing Crossover is a completely different animal.

So different, in fact, that it is carving out a new category of footwear: the hybrid dress shoe.

I’m tempted to say you either love them or you hate them, but it’s probably more accurate to say that you can’t look away.

At least I couldn’t.

Upon seeing them for the first time, I thought that this crossover shoe was singularly striking and like nothing I’ve ever seen before.

That’s not to say that it was love at first sight.

To be honest, I wasn’t sure I needed them.

And I wasn’t sure in which situations I would wear them.

And that thick, distinctive heel is, well, pretty thick and distinctive to be paired with a dress shoe upper.

But I kept thinking about them.

And they grew on me.

As they grew on me, I saw opportunities to deploy them. At receptions in Georgetown. On Saturday night date night. Potentially even at work when I don’t have client meetings.

By the time Wolf and Shepherd sent over a pair, I was ready to try them out.

The Crossover is just as striking when you take it out of the box as when you see it online.

Under the hood, it contains the same kind of technology that makes all of Wolf and Shepherd’s shoes special, like a full-grain Italian calfskin leather upper treated with a proprietary coating to improve softness and longevity.

The footbed features memory foam, and the outer sole is constructed of high-density thermoplastic polyurethane (TPU), a lightweight material designed to resist splitting and scuffs.

There were a couple of light scuffs on the right toe of the leather upper but, otherwise, the shoes were in pristine shape.

Taking them out of the box, they weren’t heavy, but they aren’t exactly ultra-lightweight sneakers either.

How much do Wolf and Shepherd’s Longwing Crossover shoes weigh?

Each of the crossovers weigh approximately 19 ounces.

As someone pointed out in the comments below, this makes the Longwing Crossovers slightly heavier than your typical shoe or sneaker.

By comparison, my Beckett Simonon Morgan sneakers weigh 14.5 ounces each, and my dress shoes from Ace Marks and Paul Evans both weigh approximately 14 ounces each.

If you’re looking for a lighter crossover from Wolf and Shepherd, their SwiftKnit Derbies weigh just 11 ounces each and are a great option for a minimalist knit sneaker.

Flipping the shoe over, the bottoms of the Crossover’s soles are emblazoned with WSXSN, which stands for “Wolf and Shepherd with Steve Nash.”

That would be eight-time NBA All-Star, two-time MVP and Hall-of-Famer Steve Nash, who collaborated with Wolf and Shepherd on the hybrid dress sneaker.

Inside the shoebox is a note from founder Justin Schneider, who writes of the collaboration that,

Working with Steve Nash on this shoe has been a uniquely fun, inspiring project for us all. Together we had an idea to create something that blended athletic ingenuity, work functionality and everyday-wear appeal in a way that hadn’t been done before.

Wolf and Shepherd donates 13% of the sales of the Longwing Crossover directly to the Steve Nash Foundation. Registered in the United States and Canada, the Foundation works to assist children in underserved communities with health, personal development, education and enjoyment of life.

Reviewing the Crossovers in real life

Stepping into the Crossovers for the first time, I felt the cushioned memory foam under my feet and noticed the high sole, which adds a little lift to my 5’8” frame.

Unlike traditional dress shoes, which start out stiff and soften after wearing, these hybrid dress shoes feel soft and immediately comfortable thanks to the pre-treated leather and sneaker sole.

That’s not to say that they don’t require any breaking in. The leather still needs some time to soften up some more, and your feet need some time getting to know the memory foam.

I made the mistake of immediately lacing up my Crossovers for a long walk around the neighborhood. My feet weren’t used to the memory foam, and my calves were a little sore that night.

After that episode, I broke them in gradually for a couple of days, wearing them around the house and my yard for short periods, which helped them adjust to my feet and vice-versa.

Now the shoes feel great throughout my days of working from home during the COVID19 crisis, including on long daily walks around the neighborhood.

I’ve been wearing the cross-overs with jeans and a t-shirt with my kids, as well as with chinos and a button down shirt.

They are a welcome addition to my smart-casual wardrobe, and a unique change-of-pace alongside other options like Chelsea boots and work boots for when dress shoes are too dressy but sneakers too casual.

One note on fit: the website suggests ordering a size up from “your Wolf and Shepherd dress shoes,” but I fit right into my normal size 9.

“The crossover is a want product,” observed Justin. “It’s highly versatile, but it’s also generic-looking so you can wear it with anything.”

Justin told me that he’s seen substantial demand for these hybrid dress shoes, which has been transformative for Wolf and Shepherd.

“The customer response, the page visits, the click-throughs started to create a flywheel for us,” he said, noting that the turn on the Longwing Crossovers is four times greater than their previously-best selling items.

Justin added that the order frequency is higher because customers know they can wear it in far more situations than a typical dress shoe.

Next up: Crossover hybrid wingtips and penny loafers

Given the success of the Longwing, it’s not a huge surprise that Wolf and Shepherd is expanding their line of crossover sneakers.

In the months to come, Wolf and Shepherd will introduce a black wingtip hybrid dress shoe featuring soft, Italian calfskin. In addition, the company will release a hybrid penny loafer.

At the end of summer 2020, Wolf and Shepherd released a long-awaited hybrid dress shoe-slash-sneaker, the SwiftKnit Derby, featuring a single-thread zoned knit upper. It’s the company’s most casual hybrid shoe yet, and is extremely lightweight and comfortable. (See my review of Wolf and Shepherd’s SwiftKnit Derby for more details.)

As for me, it’s clear I don’t need a pair of hybrid dress shoes.

Working here in Washington, DC, it’s definitely not the kind of shoe that I would wear to a meeting with a Member of Congress. And I sure don’t need a pair to kick around a soccer ball at the park on the weekend.

But do I want a pair?