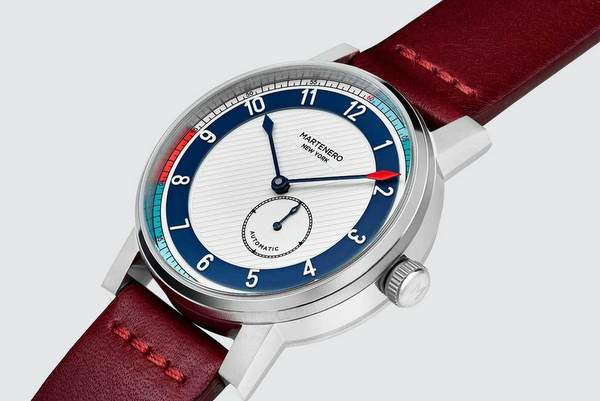 The Great Debate: Comparing Arabic Numbers vs. Roman Numerals vs. Batons on Watches

Watches have featured both Arabic numbers and Roman numerals from at least the 17th Century.

Experts suggest that Arabic numbers are less formal than Roman numerals, which take a watch from “easy-to-read fun to classical sophistication.”

Plain batons impart an even cleaner, minimalist look, though are more difficult to read at a quick glance.

My advice? Don’t pay any attention to received wisdom.

Choose the type of watch that you like to look at and that makes you feel confident while wearing it.

Menswear startups like Daniel Wellington and New York-based Martenero are working alongside long-established brands like Skagen from Denmark and Timex to give men unprecedented options for affordable watches featuring numbers or Arabic numerals.

These microwatch brands and established players are contributing to an amazing landscape of innovative men’s apparel and accessory brands that can transform your wardrobe.

Let’s explore some of my favorite affordable wristwatch brands making watches with numbers.

Style startup Todd Snyder is one of my favorite destinations for menswear, is one of the best alternatives to J. Crew, and maintains some of the most unique and impressive physical retail locations in the country. (Take a look at my review of Todd Snyder’s Madison Square flagship store.) Todd also has an impressive history of collaborations with other innovative brands.  In particular, Todd Snyder has a history of collaborating with Timex to produce a range of watches with numbers.

I’m particularly fond of the Todd Snyder x Timex Liquor Store watch in olive, which celebrates the opening of Todd Snyder’s downtown Manhattan outpost. The watch features a Japanese 21 jewel automatic movement, a not-ostentatious 38mm face encased in stainless steel, domed acrylic crystal and subtle gold accents on the dial and hands.  The strap is 18mm leather covered by a fabric top layer in a subtle shade of olive.

Undone allows you to customize many of the details, including the hour and minute hands, case, watch face, and case back. At $269, it makes an affordable everyday watch.

Originally founded by entrepreneur Michael Saiger as a jewelry brand for men, Miansai’s M12 Swiss Watch for men and women is one of the most minimalist watches with numbers you can find.

The stainless steel watch has a Swiss Ronda 582 quartz movement underneath curved mineral glass, secured by an Italian leather strap. Its 39mm case is great for smaller wrists.

I have recommended British watchmaker Christopher Ward for years (and own a C9), having fallen in love with the brand’s clean lines, simplicity and mission to be the “cheapest most expensive watch in the world.”

Christopher Ward launched the C3 Grand Tourer as an update to its C3 Malvern Chronograph, which was one of the brand’s original models when it launched in 2005. The updated version, whose styling is inspired by the dash of the Aston Martin, is versatile, with 2 face and three strap options, and features a 39mm face and Quartz movement. This is a seriously gorgeous watch.

I have appreciated MVMT’s watches for a long time, but most of them are so minimalist that they contain simple batons rather than Arabic numerals. They fixed that by releasing the MVMT Field watch.

Available with a 41mm stainless steel face and in either a stainless steel link strap (pictured) or a nylon band, this watch looks terrific and is super-inexpensive to boot. The company started out making attractive, minimalist watches for women and men, and has since branches out to other lines, including blue light blocking computer glasses.

Martenero’s Edgemere watch has a unique look that still somehow manages to remain classic, and a 40 mm diameter face that doesn’t overwhelm a wrist. It relies on a Miyota 8245 automatic movement and costs $550.

John Tarantino founded the brand as a side project in 2014 while working as a real estate professional in New York to design versatile watches that pays homage to heritage brands. This is a tremendously interesting watch at an affordable price-point.

Founded by entrepreneurs and industry veterans Michael Belen and Anthony Kerrigan, Centric Instruments is a very young micro-watch brand that makes, among other things, a self-described “most capable solar powered watch under $200.”

That’s a pretty amazing price-point for a gorgeous and durable field watch that never needs a battery replacement.

The 38 mm watch face isn’t huge, and I especially love the the look of the brushes stainless steel and white face model The brand navigated a successful Kickstarter launch of its signature Lightwell Field Watch, raising more than $47,000 in 2019 to get its first product off the ground. You can also find their good-looking watches via Huckberry.

The timepieces range in price from $475 to more than $1,000 depending on the movements. As of this writing, the company offered several models featuring Arabic numerals, including the Midsize Automatic and Oakland Officers Watch. John’s watches are gorgeous — and don’t hang around for long.

Modern Fellows caught up with John at Worn and Wound’s Windup Watch Fair at Chelsea Market in New York City, and snapped a picture of the unique timepiece pictured above, which isn’t on the company’s website.

One of several microbrands on this list, Dan Henry Watches is a Hong Kong-based company founded by its namesake in 2016. Dan is a native of Sao Paulo, Brazil and has been collecting watches since he was 10 years old.

The brand pays homage to vintage designs. Each name — always a year — reflects characteristics of that era. Dan incorporates Miyota and Seiko quartz movements into its watches, which helps keep the price point much more accessible than other brands which rely on automatic or pricer quartz movements.

The 1939 chronograph, pictured, is water resistant available in black or silver, features a 41mm stainless steel case and Miyota 6S21 quartz movement, and is listed at a very-accessible $220.

In 2015, Jack Mason co-founders Craig Carter and Michael Reese drove an airstream across the United States to introduce themselves and their watches to the world. The two met when both moved to Dallas to work for the same company 12 years prior. They reconnected to start the brand, which is focused on delivering classic styles for men and women at a really affordable price-point.

Their watches are made from Italian leather straps, and utilize Japanese and Swiss movements.  Jack Mason watches are also available at Stag Provisions, one of my absolute favorite menswear stores, as well as via a storefront on Amazon and at Nordstrom.

The brand features a TON of options for watches with Arabic numerals, including a 42mm Aviator listed at an attractive $195.

After graduating from a two-year WOSTEP (Watchmakers of Switzerland Training and Educational Program) in 2010, Cameron Weiss trained with the Audemars Piguet and Vacheron Constantin in the US and Switzerland.

Weiss then founded his eponymous company in 2013 out of San Francisco, California “to restore prestige to American watchmaking.” He has iterated on his original model, and now produces the Standard Issue Field Watch with a 38mm watch face as well as a larger 42mm version.

For someone with a slimmer wrist, the 38mm option is nice to have. I particularly love the look of Weiss’ 38mm standard issue field watch latte dial on brown horween leather, which lists for $1,250.  All of Weiss Watch Company’s watches are made in the United States. From the website:

Each fully mechanical movement is our manually wound Caliber 1005 which is comprised of over 100 Swiss parts that are hand-finished and assembled in Los Angeles, California.

The Shinola Runwell 47 mm is a substantial watch, though the company also makes 41 mm counterparts. The stainless steel watch features a Argonite 1069 Quartz made from Swiss and other imported parts.

Graphic designers Ross Baynham and Pete Sunderland founded Instrmnt in Glasgow, Scotland in 2014 with one product — the Instrmnt 1 — via a wildly successful Kickstarter campaign whose sales more than quadrupled their initial target.

The pair opened a physical store in their hometown and embarked on new watch designs, including limited edition models. Their minimalist original creation continues to stand out, though you’ll have to look closely to see the Arabic numerals around the dial. The watch features a Swiss Ronda 585 3H movement, 40mm watch face and Made-in-Germany leather strap.

Their watches are designed, assembled and tested in the United States (specifically, in Portland, Oregon). The company sells watches with two different watch-face circumferences. At 36mm and 40mm, both are great options for guys like me with smaller wrists. Their Century Series watches are listed on their website at $945.00.

Twenty-something entrepreneurs CEO R.T. Custer, Tyler Wolfe and Frank Barber founded Vortic Watch Company, an American manufacturer of high quality watches inspired by U.S. railroad stations and other bits of Americana at the turn of the 19th Century, while they were still students at Penn State.

Headquartered in Fort Collins, Colorado, the brand celebrates the heritage of American watchmaking and marries tradition with innovation, using 3D printing to create stunning, one-of-a-kind and limited run wristwatches in the United States. Use their website to create your own or browse for ready-made options – many of which feature Arabic numerals.

Named for Denmark’s northern beach town, Skagen was founded in 1989 in NY by husband and wife Henrik and Charlotte Jorst, by New York-based transplanted Danes who wanted to create Swiss-inspired watches at a lower price-point for the masses.

Fossil purchased Skagen in 2012, but the Denmark-inspired company continues to operate as a wholly-owned independent subsidiary, and continues to crank out watches like this Mens Nordstrands, which features a 40mm circumfrance case and quartz movement, and is available at Amazon. 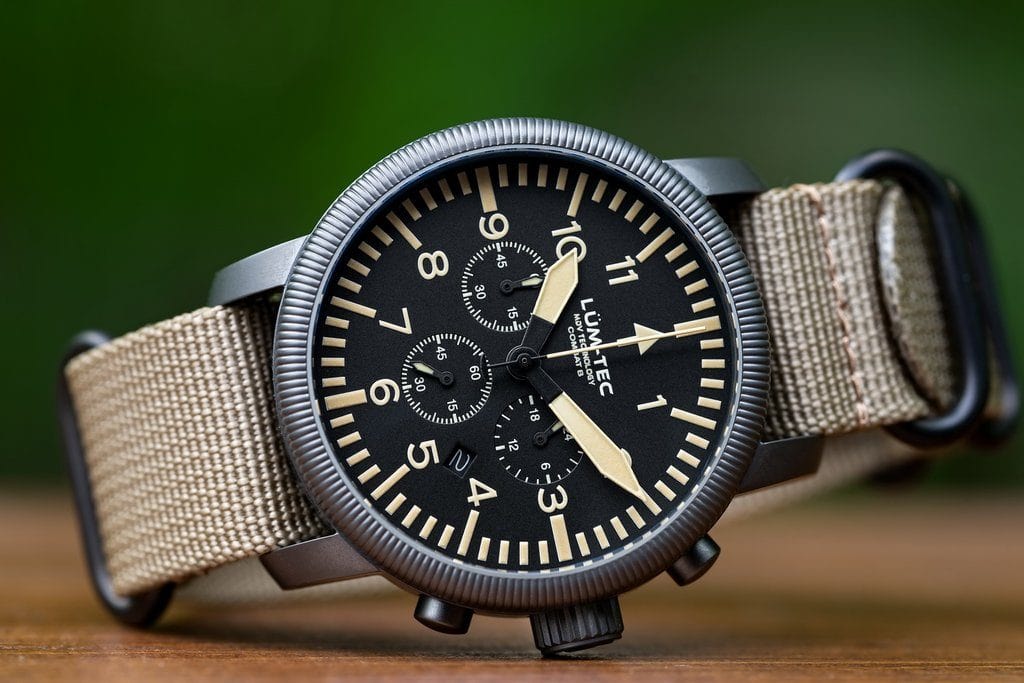 While its website may not be the flashiest, Lum-Tech watches offers bold wristwear options.  All of their watches from this family-owned company are assembled by hand in Ohio. 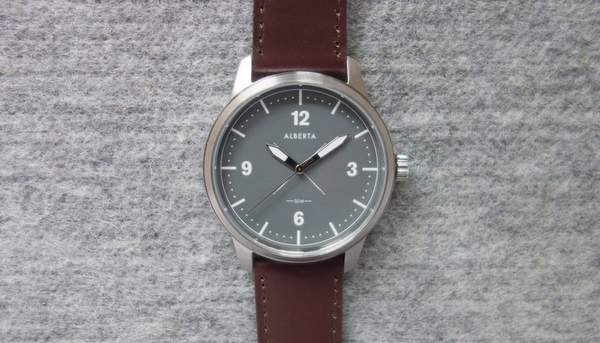 Founder Leo Josephy began this minimalist line and sold many of his watches locally in Alberta, Canada.  He sourced some of his saddle straps from a local leather purveyor. Ok, so not all of the Arabic numerals are present, but Alberta’s Standard Watch in slate gray looks clean and professional and, at about $100, won’t break the bank.

Update: Alberta Watch Company has closed. According to its website: “After selling more than 1000 watches, Alberta Watches is officially closing shop. Thank you to all our dedicated customers. If you have any issues with your watch, don’t hesitate to get in touch.”

What brands are missing from this collection of timepieces?