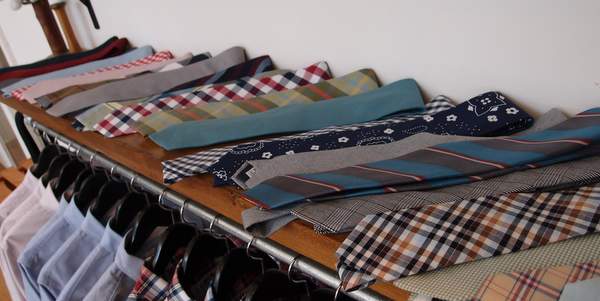 Men’s ties are a critical finishing touch for a suit and one of the few places where guys can express some personality. Discover the stylish men’s clothing companies below for some of the best stores to buy neckties online.

Take a chance on a necktie

I’ve found neckties to be one of the easiest ways to take a chance on a new retailer or to venture abroad.

For most of the other pieces of clothing in my closet, when I know I need something particular, it’s frankly more comfortable and convenient to shop state-side from innovative retailers with U.S. operations like Bonobos, Charles Tyrwhitt, Ledbury, Nordstrom and Wolf and Shepherd.

But there are a wealth of innovative and often-small businesses in the UK, France, Italy, Japan, Thailand and in the United States who make interesting and unique ties that are worth checking out.

What is the best width for a necktie?

The best width for a necktie will vary based on your size and preferences.

I favor slim-but-not skinny ties because they look best on my relatively slim-and-shorter frame.

For me, the best necktie width is 7 centimeters or 2.75 inches. Anything narrower is too skinny and not appropriate for my day-to-day professional life, and anything over 3 inches is way too wide for my frame.

How much should men’s ties cost?

This chart compares the cost of neckties for men online:

Where to buy neckties for men

With that in mind, here are more than a dozen of my favorite places to buy neckties for men.

Greg and Gina Shugar founded The Tie Bar out of Chicago in 2004 (and since sold the company to a private equity firm) with a laser-like focus on providing quality yet cheap neckties for men. The Tie Bar has a wide selection of very stylish and very affordable ties.

I love that many of their ties are available in multiple widths, ranging from super-skinny (2 inches) to skinny (2.5 inches) to slim (3 inches) to reguar (3.25 inches), though they manage to skip over the best possible width for a tie (2.75 inches).

In March 2021, Tie Bar launched an incubator program to partner with emerging designers, beginning with Whitney Michel. They opened a series of brick-and-mortar shops around the United States, though pulled back from that effort as a result of the COVID-19 pandemic. (Look inside the now-shuttered Tie Bar showroom in Washington, DC.)

While their ties all look great, I’ve had a mixed experience with their knots. The knot on one knitted tie I bought is comically large no matter what I do, the result of too-thick material and lining. Others have resulted in much better looking knots.

They also make super-attractive neckties that are designed in Richmond, woven in Italy and hand-made in the USA (in New York), though, with most at 3.25 inches in width, they tend to be a little wide for me.

UK-based Charles Tyrwhitt may be best known for its affordable dress shirts for men, but the company is also an excellent option for quality, cheap neckties.

Founded in 1986 by Nicholas Wheeler, I’m convinced that Charles Tyrwhitt is one of the best dress shirt brands you can buy for under $50. I first came to know the company via their mail order clothing catalogs and inserts into the New York Times, and then through their brick and mortar retail locations in Washington, DC and New York.

Charles Tyrwhitt maintains an extensive selection of ties that come in a variety of fabrics like silk, linen, cotton and wool, as well as patterns and weaves including stripes, polka dots, floral and geometric designs, checks, paisley and grenadine. They also sell stain-resistant ties.

Their standard width ties are 8 cm (3.14 inches), and they also maintain a smaller selection of slim-width ties that are 6.5cm (about 2.5 inches).

Charles Tyrwhitt’s neckties retail for $49 and up, though watch out for frequent sales and multibuys that can lower the cost by 50% or more.

Nordstrom is my favorite retailer for the digital age thanks to its outstanding customer service, website functionality, and free shipping and return policies. The Washington State-based retailer features its own brands alongside traditional and up-and-coming men’s clothing companies, making it a great one-stop-shop to discover new brands.

My favorite part of Nordstrom’s website is that you can filter ties by width. There is an option to see neckties that measure between 2.75 and 3 inches in width (my favorite).

Happily, you can filter the Dark Knot ties by width. At 2 5/8 inches, their “skinny ties” are the perfect width for me.

Their gorgeous and affordable ties are handmade in Italy and feature thoughtful details and interesting patterns. Choose from items including a grenadine garza untipped luxury hand-rolled tie in mustard, a flower tie made from recycled plastic, or a shantung untipped navy and burgundy stripped tie.

Sigh. If only I could afford Drake’s ties.  Founded in 1977 by Michael Drake, Drake’s haberdasher manufactures from East London and is best known for its fabulous and expensive selection of knitted, woven and grenadine ties. I love perusing their shop just off Savile Row in London.

You can find Drake’s ties on the company’s website, and at high end and specialty menswear retailers including the fantastic Todd Snyder and the also-incredible No Man Walks Alone, as well as Mr. Porter and menswear magazine-cum-retailer The Rake.

Canada-based menswear startup Spier and Mackay may be best known for their affordable yet luxurious suits, but they also house a nice collection of cheap ties for men starting from $35.

At 3.3 inches, their standard width ties are much wider than I prefer.

He is also the founder of A Modest Gent, and has an eye for fashion  I like the look and variety of his slim paisley, knit and plaid ties. At around $40, his ties are also very reasonably priced.

You can shop these ties via Foundation Menswear’s Esty storefront.

The best part? Customers can select either a slim width of 3 inches or traditional width of 3.5 inches (yikes!). My only wish is that Kent made ties in a 2.75 inch width.

When I’m looking for a new tie, I often look to the Nines, a Paris-based retailer of neckties, cufflinks, socks, dress shirts, ties and more.

The Nines was founded by friends Erwan Desvignes et Renaud Martel, who had met in Sweden and jumped into menswear in France. I’ve had a chance to visit their shops in Paris and order several ties from the company.

Many of their ties are 8 cm, which is a tad wider than my preferred width of 7cm (around 2.75 inches).

As I wrote back in 2014, Chipp Neckwear founder Paul Winston is a throwback to an earlier time.  Paul makes and sells a nice range of grenadine, ancient madder and “conversation piece” printed silk ties from his storefront and Chipp Neckwear’s online e-commerce site out of New York City.  I wish he’d make his ties in a width narrower than 3.25 inches, but that’s my only complaint.

UK-based Augustus Hare makes especially good-looking knitted ties (the ones with square tips) in a width of 7 cm (2.75 inches), as well as woven and printed silk ties, cuff links, pocket squares and socks.

As they note on the Sam Hober website, Sam Hober “can make a tie with any length, width or shape that you request, including custom made 7 fold ties, and 6 fold ties” (aka 7 fold ties).

Their website is the complete opposite of slick, but it’s user friendly enough and sufficient for the Hobers to convey a lot of information about A LOT of different bespoke neckties for men.

The family had maintained a separate web property, Benjamin Hober, to sell ready-to-wear ties (aka ready-made ties) but the site appeared to be down for maintenance the last time I visited it.

Bonobos is a stylish men’s clothing option for a range of cheap chinos, button downs, athleisure and other wardrobe staples. The digital-native retailer also stocks a selection of stylish neckties for men, made variously from silk, linen, and cotton fabrics. (Bonobos is one of my favorite menswear retailers and sells a range of clothing that would fit right in with the Dark and Light Academia fashion trends sweeping social media.)

Bonobos’ neckties for men are made in the United States. They tend to offer neckties in widths of 2.75 inches or 3 inches.

Bonobos neckties start at $68 (but watch out for sales that can bring the cost much lower).

Where to buy Grenadine Ties

One of my favorite types of neckties is the grenadine silk tie for men. Here is my list of where to find the best and cheapest grenadine neckties online.

Note that, in the chart below, The Tie Bar’s “Grenefaux” ties are not real Grenadine silk, but if you want the look of grenadine ties without the price, they get some love on Reddit for their excellent ratio of value-to-price.

Chart: How much do grenadine ties cost?

As the chart below illustrates, while it is possible to buy a grenadine tie for as low as $50, most grenadine ties sell for between $75 and $195.

Where to buy Ancient Madder ties

Madder is a natural, plant-based dye derived from the evergreen Rubia tinctorium plant. Ground madder root has been used since ancient times to dye cotton, silk and other textiles.

While the color is naturally red, the root can be processed to produce a range of pink and purple shades as well.

According to Encyclopedia Britannica:

The dye properties of the madder root appear to have been known from the earliest historical times; cloth dyed with madder has been found on ancient Egyptian mummies, and madder was used for dying the cloaks of Libyan women in the time of Herodotus (5th century BCE).

What are Ancient Madder ties?

The process of creating a proper madder tie is lengthy and time consuming. The Gentleman’s Gazette describes the process:

To produce a blue madder, for example, a natural white base cloth is outlined with a pattern and highlight colors are applied to certain areas. Once the pattern printing is finished, the fabric is immersed in an indigo bath, rendering the omitted areas Madder blue.

Ancient madder ties are characterized by rich colors, a dusty appearance and a smooth, suede-like feel.

Modern madder neckties are produced with synthetic dyestuffs rather than derived from plants.

Chart: How much do Ancient Madder ties cost?

Who makes your favorite neckties?

What brands are missing from this list? Leave your thoughts in the comments.