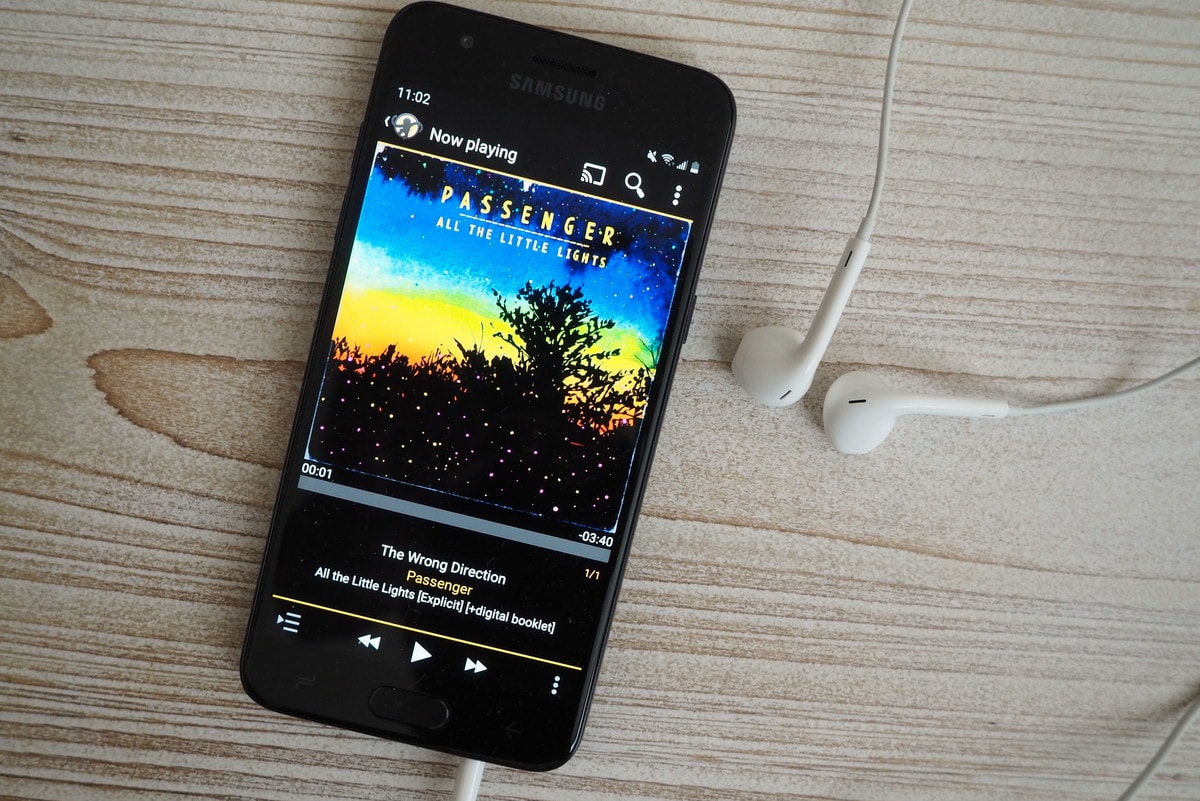 Explore the best dedicated Bluetooth mp3 players for 2020, and find out why my favorite portable music player with a touchscreen is an inexpensive alternative to the Sandisk Clip and discontinued Ipod Shuffle. (It makes a great kid’s MP3 player and also terrific for workouts and running.)

After years of frustration, I finally found the perfect dedicated Bluetooth MP3 player.

For years, I have been looking for a dedicated MP3 player for kids as well a separate Bluetooth-enabled mp3 player for running and exercise.

After testing several options and wading through countless outdated “best MP3 player” listicles, refurbished iPod Shuffle listings on eBay and reviews of high-end music players and smart watches that cost more than an iPhone, I stumbled upon the perfect, cheap option.

My absolute favorite portable music player with Bluetooth has a touchscreen and speaker, costs less than $40, is fully-featured, and doesn’t require you to buy a refurbished iPod or take your chances on plugging in an MP3 player from an unfamiliar brand from China.

Ordinarily around here, I write about innovative men’s fashion startups, interesting women’s clothing brands, and where to buy the best prescription eyeglasses.

But, during the COVID19 pandemic, I’ve started focusing on maximizing work from home and distance learning environments for me and my kids, including where to buy a new Zoom shirt and evaluating options for the best budget student laptop for my kids’ distance learning.

I’ve also taken on a few projects I’ve been meaning to get around to, including a deep-dive into MP3 players. Specifically, I’ve scoured the internet to search for a dedicated, locked-down MP3 player for my kids.

What is an MP3 player?

An MP3 player is an electronic device dedicated to playing digital music files.

An MP3 player is the early-21st-Century equivalent of a walkman.

The acronym MP3 stands for “MPEG Audio Layer-3,” a type of audio file developed by the now-disbanded Moving Picture Experts Group (MPEG). MP3s files are compressed so that they sound similar to uncompressed audio files but are much smaller in size.

Technically, MP3s are “lossy,” which means they are not as clean as original recordings, though, when encoded properly, the difference is generally difficult if not impossible for the average casual listener to notice.

The Apple iPod is the most famous example of a dedicated MP3 player (or, more accurately, digital music player), and it revolutionized music when it was introduced in 2001.

Why is it so difficult to find a dedicated MP3 player today?

As recently as 2017, the Apple iPod, iPod Shuffle and iPod Nano combined top-of-the-line hardware with trusted, easy-to-use software to produce the best MP3 players (in my opinion).

But in 2020, the options for a dedicated MP3 player are frustratingly limited and extremely underwhelming.

Apple discontinued the iPod Shuffle and iPod Nano in 2017 and the classic iPod in 2014.

There’s a good reason Apple decided to discontinue the iPod Classic, Shuffle and Nano: The business case dried up.

First of all, everyone has a phone in her or his pocket that can play MP3s, so there isn’t a lot of demand for lugging around a separate, dedicated MP3 player.

Two use cases for a dedicated MP3 player

In my household, though, I’ve found at least two use cases for having a dedicated MP3 player: my kids and exercise.

A dedicated MP3 player for kids

When I was a kid, I fondly remember having a record player, than a walkman, then a portable CD player, to listen to music. I received my first record — Michael Jackson’s Greatest Hits — when I was in elementary school.

Having that opportunity to choose music to listen to myself was empowering. I want that same experience for my kids.

At this moment in their lives, I don’t want my elementary school kids to have unfettered access to the entire iTunes or Amazon Music, or to a tablet or phone with other games and apps. I want them to have a dedicated kid’s mp3 player with a touchscreen that is locked down to specific playlists, albums and artists, and that is simple and easy to use.

A dedicated MP3 player for workouts, running and exercise

Another reason to buy a dedicated music player is for workouts and running.

When I exercise, I want to reach for a dedicated MP3 player for workouts and running. I don’t want to jostle my everyday phone through a weights workout or on a jog outside.

I like having a device that simply plays music, tracks my workout and running stats, has a clock and stopwatch for timing intervals, and allows me to pop in my Bluetooth Apple EarPods and go.

Given the limited choices, what are the best MP3 players with Bluetooth in 2020? Here is my list:

For me, by far the best option is to convert a prepaid Android phone into a cheap Bluetooth MP3 player with a touchscreen.

Each of these portable devices cost less than $40. (The Samsung cost me less than $25.)

For me, a converted Android device is the perfect alternative to the iPod Nano or Shuffle, an expensive workout watch, Sandisk Clip, or taking my chances on one of the many unknown brands available on Amazon.

For under $40, my MP3 player has a touchscreen and Bluetooth.

This solution even allowed me to completely lock down Android one app so I could give a dedicated mp3 player to my kids.

Coming from the Apple iPhone universe, where my experience suggests its impossible to use any of the features of a locked iPhone without first activating it with a carrier, I was initially worried that I wouldn’t be able to use one of these pre-paid Android phones without activating service.

The Android devices that I converted into MP3 players had no such restrictions.

All three Android phones that I bought using Tracfone, Simple Wireless and Total Wireless were fully-functional from the moment I turned them on. I didn’t even need to install a SIM card.

Where to buy: Search retailers like Best Buy, Target, Walmart and Amazon for deals on pre-paid phones, or buy directly from providers like Total Wireless or Tracfone. Get a coupon for 25% off Total Wireless by signing up for emails.

You could use an iPod Touch as a dedicated MP3 player, though you’ll pay upwards of $200 for the privilege. Also, if you want to lock down the iPod to just one app on a permanent basis rather than just for a session using Guided Access, it is maddeningly difficult to do so. Trust me, I’ve tried.

A used Apple iPod Nano or iPod Shuffle via eBay

Another option is to purchase a used iPod Shuffle or iPod Nano via eBay or another site.

I seriously considered buying an iPod Nano 7th or 8th Generation, which ticked a lot of the boxes that were important in a dedicated MP3 player: The iPod Nano 7th and 8th Generations have Bluetooth and a touchscreen and are relatively easy to transfer music and upload if you’re familiar with Apple and iTunes environments.

Then I looked at the price: Seventh-generation Apple iPod Nanos are fetching $100 or more in used condition, and availability from third party sellers is limited. (Apple does not appear to sell refurbished iPod Nanos or Shuffles directly anymore.)

I much prefer the under $40 solution of converting a pre-paid Android phone to a dedicated MP3 player.

A smart watch from Apple, Fitbit, Garmin or Samsung

Companies from Fitbit to Garmin to Samsung make connected smart watches that enable users to download MP3s and, in some cases, stations from services like Deezer, Pandora or Spotify (depending on the brand).

The downside? You’ll likely pay $200 or more for the privilege, and you get to tap through your music on a tiny dial attached to your wrist.

Where to buy: You can search for smartwatches on Amazon or Best Buy or via brand specific stores like Apple, Fitbit, Garmin or Samsung.

Oakcastle’s 16GB MP100 Mini Portable MP3 Player with Bluetooth and FM Radio is among the most affordable Bluetooth MP3 players. The MP100, which is designed in Cambridge, England, comes equipped with a music player, FM radio and sound recorder. The company says the tiny, lightweight player was “meticulously designed with sports in mind,” and features a built-in clip for your clothes or belt. (No touchscreen though.)

Ok, Mighty Vibe’s Spotify and Amazon Music Player with Bluetooth is more accurately a digital music player. If you’re looking for a simple and small player for your Spotify or Amazon Music playlists and podcasts, you should think seriously about the Mighty Vibe player. It can hold more than five hours of Spotify and Amazon music playlists and podcasts; it features Bluetooth and wireless syncing via the Mighty mobile app; and it’s small, lightweight, durable, water, sweat and drop resistant and kid-friendly.

A wide selection of cheap Bluetooth MP3 players via Amazon

Search Amazon.com for an MP3 player, and you’ll find a dizzying array of cheap options with stellar reviews from brands that I’ve never heard of before. Let’s see:

It’s certainly possible that these companies produce stellar, reliable products. But some of them don’t even have dedicated websites. I can’t find one for TIMMKOO, whose trademark appears to be registered to the Shenzhen yisichuang Technology Co., Ltd.

When it comes to an electronic device that I’m going to plug into my computer like a Bluetooth MP3 player, I’d prefer to go with a well-known brand.

The Sandisk Clip is an inexpensive option for a simple MP3 player, but you’ll sacrifice functionality. I bought one as an exercise player, and it was fine for a while until it accidentally went through the washer. There are a couple of pros to the Sandisk Clip: It’s super-small, clips easily to your clothing for running, and has an FM tuner.

However, the Sandisk Clip doesn’t have Bluetooth or a touchscreen, the buttons are tiny, the interface is frustrating and I found it difficult to load songs. Plus, at $30-40 retail, the Sandisk Clip costs about as much as my top option, converting an Android phone into a dedicated MP3 player.

The best MP3 player is a better alternative to the iPod Nano and Shuffle, Sandisk Clip, unknown brands from China, and your old iPhone.

It took me a while to discover it, but for me the best Bluetooth MP3 player is my converted LG Journey prepaid Android phone. If you’re willing to put a little bit of work into setting it up, it makes a great MP3 player for kids and for workouts.