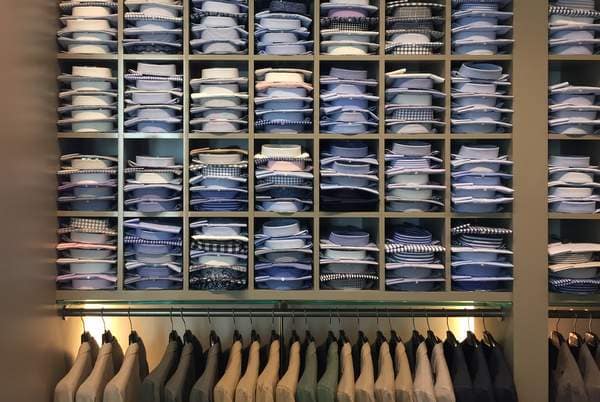 Parisians are a stylish bunch, and the city of Paris is blessed with a wide selection of terribly interesting mens’ clothing brands. We put together this guide to the best shopping for men’s clothing in Paris to guide you through the city.  Don’t miss the following Paris boutiques to find amazing suiting, dress shirts, neckties, unique cufflinks, colorful socks, gorgeous shoes with hand-applied patina and more, which we discovered during a recent visit.If you’re popping over to London, look at Modern Fellows’ walking guide of the best menswear shops in London. Arthur and Fox has been around for 40 years, supplying Parisians and visitors with classically-tailored shirts, suits, overcoats and accessories. The brand maintains an absolutely stunning selection of neckties, including a wide variety of grenadine in eye-catching colors, along with classically-tailored dress shirts, suits and intriguing unlined,, half-canvassed, soft-shoulder, summer-weight jackets. While you will find their 8 boutiques scattered around Paris, you won’t find them online. (At least this writer couldn’t.) Founded in 2011 by entrepreneurs looking to rekindle a shuttered atelier in the Loire Castle Valley, Cinabre sells made-in-France bow ties and neck ties constructed from a variety of interesting fabrics along with lapel pins, pocket squares, scarves, wallets, belts and more online and via their Paris boutique in the 10th arrondissement at 20 rue d’Hauteville. (Photo credit: Cinabre Paris) French designer Emile Laufrie opened his flagship store in Paris more than 20 years ago. See where it all began in Paris and check out a unique selection of sweaters, casual blazers, trousers, scarves and more.  The man does color really well, from pale greens and soft violets to more traditional blues. I’ve been a fan of French menswear startup The Nines for years. Founded by friends Erwan Desvignes and Renaud Martel, the Nines maintains a constellation of sub-brands around essentials such as belts, cufflinks and shirts.  I adore their Maison de Cravate (House of Ties) brand, which produces a range of interesting bow ties and gorgeous, slim neckties made from fabrics including grenadine, knit cotton, linen and wool. Most are around 7 centimeters or 2.75 inches in width — my preferred necktie size — and are made in France, Germany and Italy. The Paris-based menswear startup opened several brick-and-mortar boutiques that feature selections of shirts, ties, boxers (underwear), socks, belts  and cufflinks.  Modern Fellows profiled the brand and peaked inside their Saint Germain boutique. Daring is the word that comes to mind as you step inside one of De Fursac’s shops about Paris. From a red nubuck jacket to a bold, thick-gauge windowpane suit, De Fursac can push the envelope. But alongside those bold pieces sit more muted dress shirts, suits, ties and accessories. The brand began in Paris in 1973 originally under the name Monsieur De Fursac. Over time, it strengthened its collaboration with Italian mills to sharpen its style. A real gem. Belgium brand Bellrose has been designing high-end menswear since 1989.  Their network of stores around Paris feature a stylish selection of coats, soft sports jackets, casual knitwear and other essentials. France’s answer to Tommy Hillfiger, entrepreneur Daniel Cremieux founded his eponymous label in 1976 in Paris after returning from the UK, where he discovered British style and a love of menswear. The brand is now run by son Stéphane, and features crisp blazers paired with t-shirts, chinos, braces (suspenders), and other preppy staples. Italian startup Lanieri has opened a series of ateliers around Europe. Their Paris showroom in Saint Germain is a great place to get yourself measured and browse luxury Italian fabrics from the likes of Reda and Loro Piana.  Modern Fellows took a look inside Lanieri’s Paris atelier.

Cafe Coton traces its roots back nine generations to Northern France in the early 1800’s. Today the company maintains a sprawling number of stores across Europe, the Americas and Asia, selling affordable, basic shirts, ties, boxers and accessories.

Short on time? It’s easy to discover a number of Paris menswear brands, including many of the brands listed above, under one roof at the city’s main department stores:

Le Bon Marché offers a range of menswear designers, including Balthazar suits, outerwear, shirts and accessories and an outpost of Le Calceophile shoes.

What’s your favorite menswear brand in Paris? Who is missing from this list?