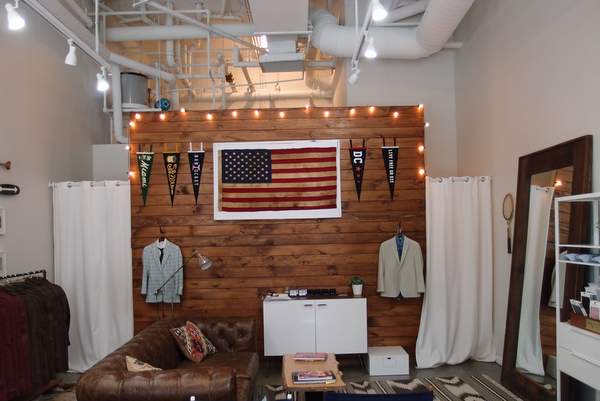 Read Wall has cooked up an amazing showroom in Washington, DC’s bustling Shaw district to show off his Made-in-America line of custom and off-the-rack menswear suits, shirts and accessories.

Inside the shop, Read showcases a growing line of custom and off-the-rack mens’ suits, blazers, trousers, dress shirts and ties from his own collection.  The showroom also stocks accessories from select partners, including dress shoes by Alden and socks by our friends at American Trench — and a classy collection of bourbon. Wall, who grew up in DC, landed in Shaw from Georgetown, where he had opened a temporary and then permanent outpost several years ago. He was lured by developers and a longtime friend who runs the nearby Compass Coffee.

Read’s suits feature natural shoulders and a soft structure that combine for what he calls “a uniquely American silhouette.” While American-made menswear can be expensive (including at Read Wall, where they offer suiting fabrics from the likes of Loro Piana), the company offers — as of this writing — a starter deal of 4 shirts for $500. At $125 each, you can get a custom experience — and American made shirts — for around what you’d pay for a quality off-the-rack shirt manufactured in China. Read and his team host events periodically. Some are private for good customers while some are open the public and feature co-hosts like local distilleries. Read has also been thinking through the idea of opening up his space for private events like political fundraisers. Politicians, he said, have been good for business. Members of Congress and the administration are attracted to his custom American-made suits. Some just stop in as they’re wandering by. Jesse Jackson popped in one day out of the blue to get measured up for shirts.

While most of his suiting fabric comes from Europe, Read stocks a line of wool fabrics made in Connecticut, so customers can get a suit that is made entirely in America from fabric to construction.