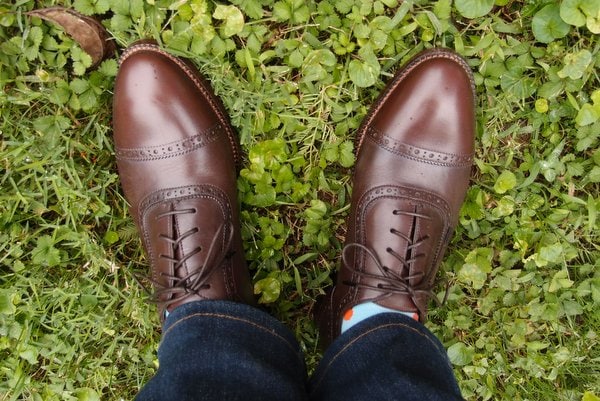 Direct-to-consumer menswear shoe startup Beckett Simonon has a unique business model that focuses on providing luxury dress shoes, boots and leather sneakers for less. Read on for my review of Beckett Simonon to see why, after wearing them for more than a year, I think their shoes are worth the wait.  Also, find out how to get a coupon for 20 percent off your purchase.

If you’re just here in search of a coupon code, save 20% off Beckett Simonon shoes, boots, sneakers or leather goods via this link and by entering in coupon code MODERNFELLOWS at checkout.

In full disclosure, over the years, Modern Fellows has received a pair of Durant oxfords and Morgen leather trainers at no cost from Beckett Simonon.

Before jumping in, these are the latest coupons and promo codes that I have for Beckett Simonon:

What is Beckett Simonon?

Beckett Simonon is a men’s fashion brand founded in 2012 in Colombia by Andres Nino and Nicholas Hurtado. The company makes small-batch runs of high-quality dress shoes and leather sneakers for men.

A Brief History of Beckett Simonon

Becket Simonon is one of many modern fashion brands helping men dress sharp.  Beckett Simonon has undergone a dramatic transformation since its founding in 2012. Launched by entrepreneurs Andres Nino and Nicholas Hurtado, pictured below, the company pre-dates many of the other direct-to-consumer dress shoe brands that now compete for men’s attention.

Where are Beckett Simonon’s shoes made?

When Andres and Nicholas first launched, they outsourced production to factories in South America and India and carried inventory, which meant they offered products in-stock and ready to ship. The founders discovered that early business model forced them to relinquish too much control over the manufacturing process and resulted in some early unhappy customers and negative online reviews.

Andres and Nicholas changed course, purchasing a factory in Portugal and training up skilled artisan shoemakers to manufacture directly for the company.

“Getting such a level of control on the product was a tremendous step for us,” Nicholas told Modern Fellows in an interview. The trade-off is that, “right now, we don’t have a huge production capacity, but we know exactly what goes into each of our shoes and we’re responsible for the craftspeople behind them.”

In the process, the two also changed their business model. They stopped offering products in-stock and ready to ship and began the current made-to-order system. “This allowed us to increase the overall quality without increasing the prices,” said Nicholas, and “allowed us to create a perfect balance between our supply and customers demand. There’s nothing extra. All products have an owner.” 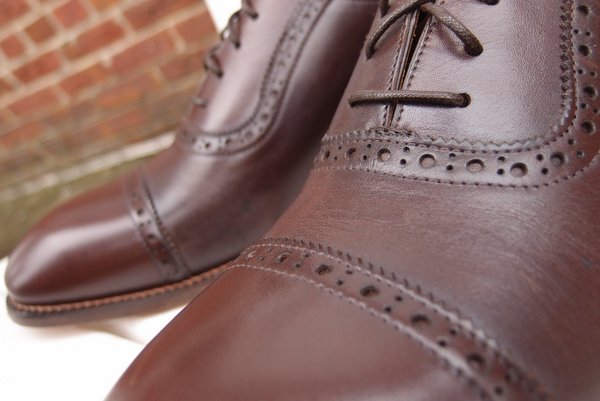 How much do Beckett Simonon shoes cost?

Assessing the Quality and Value of Beckett Simonon Shoes

At under $200, their dress shoes ring in at substantially lower than luxury dress shoe options at the local department store or even online – but are comparable in terms of the materials, components, construction and finishings they incorporate.

The shoes – which are hand-made one at a time – feature Blake construction, and the outer sole is fully re-solable. (Blake welting, or Blake stitching, is a method of connecting the upper, insole and outsole together via a single stitch on the inside of the shoe. Blake welting allows shoes to be more flexible and narrow, since the stitch is on the inside of the shoe, and allows the outsole to be resoled when needed.)

Nicholas also emphasized that, while “value is important, it’s also about buying responsibly, reducing waste and supporting ethical manufacturing.” The company guarantees the quality of the product and the working conditions of the craftspeople behind them. For a customer, “it’s knowing something is being made expressly for each individual.”

Out of the box, the first thing that struck me was that the shoes stand out from the crowd. The detailing is extremely interesting but not overwrought.  The semi-broguing on the Durant Oxford Brogues that Beckett Simonon sent over is beautiful.

Looking even closer, one of the most impressive features of Beckett Simonon’s shoes is the stitching. The stitches are clean and tight, and bolster the shoes’ all around look.

They felt great out of the box. They weren’t overly stiff or wooden, and they started out comfortable throughout the workday.

As I write this update, after wearing these shoes regularly to work for more than a year, they have gotten even better with age.  After about 3 weeks of moderate use, the Durant oxfords became even softer, and now are super-comfortable.

The leather, stitching and soles have also held up remarkably well with little creasing or signs of wear. 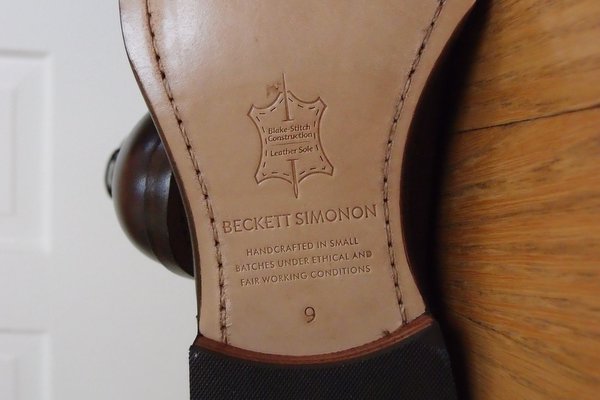 The trade-off for this tremendous value is that Beckett Simonon’s shoes are made-to-order.

Because the company manufactures directly in its own workshop and doesn’t need to factor inventory costs into its cash flow, they are able to operate with modest profit margins and deliver superior dress shoes at a lower cost. So let’s review how the process works and how long it takes to receive a pair of Beckett Simonon shoes.

Here’s how it works:

“It’s a different experience,” said Nicholas, adding that, “if someone needs a pair of shoes in the next couple of days, we’re not even an option.”

“But when they can afford to wait a few weeks, we promise it’s well worth it and they’ll be well rewarded,” Nicholas said. 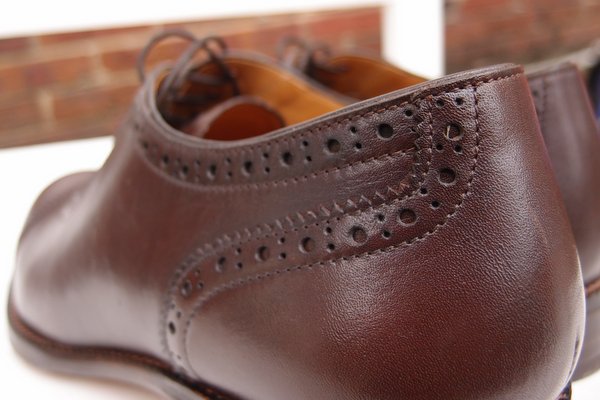 Importantly, the company communicates with customers during the production period and involves them in the manufacturing process.

Customers get a backstage pass into Beckett Simonon’s studio.  “We send frequent order updates showing the crafting process to the customer,” said Nicholas.

Nicholas noted that, “the experience is entirely risk-free for the customer.” Customers can cancel at anytime during the manufacturing process.

Beckett Simonon offers a 60 day money back guarantee on all unworn products, plus free returns and free size exchanges.

The company also offers a one year warranty, which isn’t a standard feature.  I’ve definitely worn out pairs of dress shoes in less than one year.

This commitment to the customer has resulted in a steady stream of repeat buyers.  “About half of our sales come from return customers,” Nicholas pointed out.

“They’re our biggest advocates, so a large part of our revenue comes from the people they refer,” he added. 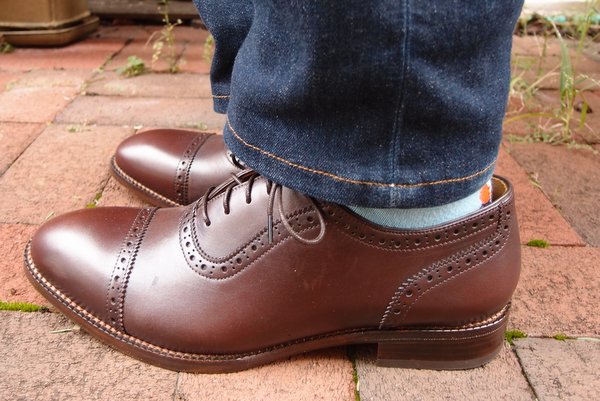 Nothing ever disappears on the internet, and a handful of early negative reviews on menswear forums and Reddit persist.

Importantly, the founders owned up to their early challenges, transformed their business model rather than making cosmetic changes, and became laser-focused on their commitment to customer service.

“We always go the extra mile and our customer service team is incredible,” he said. “We normally have a Help Scout happiness score above 94 points” [editor’s note: this is extremely high].

They also sent around new shoes to those early reviewers, which resulted in new, glowing reviews from the likes of Justin Jeffers of the Fine Young Gentleman blog. 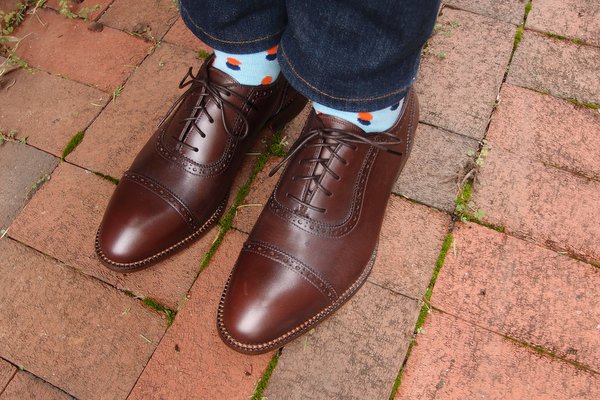 What’s Next for Beckett Simonon

While the company has had a laser-like focus on dress shoes, Beckett Simonon plans to establish new product categories more firmly in the coming months.

The company has been experimenting with a really impressive variety of leather accessories, including a line of nubuck leather belts, as well as leather briefcases, backpacks, duffel bags and weekenders.

Nicolas said he and his co-founder see a tremendous opportunity to fully establish Beckett Simonon’s line of leather menswear accessories in the coming years.

Firmly establishing a future production line is also critical to the company’s plans.

The founders have hired apprentices at their workshop in Portugal, which, over time, should help ramp up production and shave time off of delivery times.

“Craftspeople for this type of shoes are scarce, so we’re already training a new generation,” said Nicholas.

Nicholas added that, “we’d like to keep focused on refining our product line and accelerating our delivery times.” The company began with a lead production time of 12 weeks, and they are down to 6 to 8 weeks depending on the product.

“We see a future in which we could craft an order from start to finish in two-to-three weeks,” said Nicholas.

3 thoughts on “Updated Review: Beckett Simonon Shoes Are Worth the Wait (Plus 20% Off Coupon)”