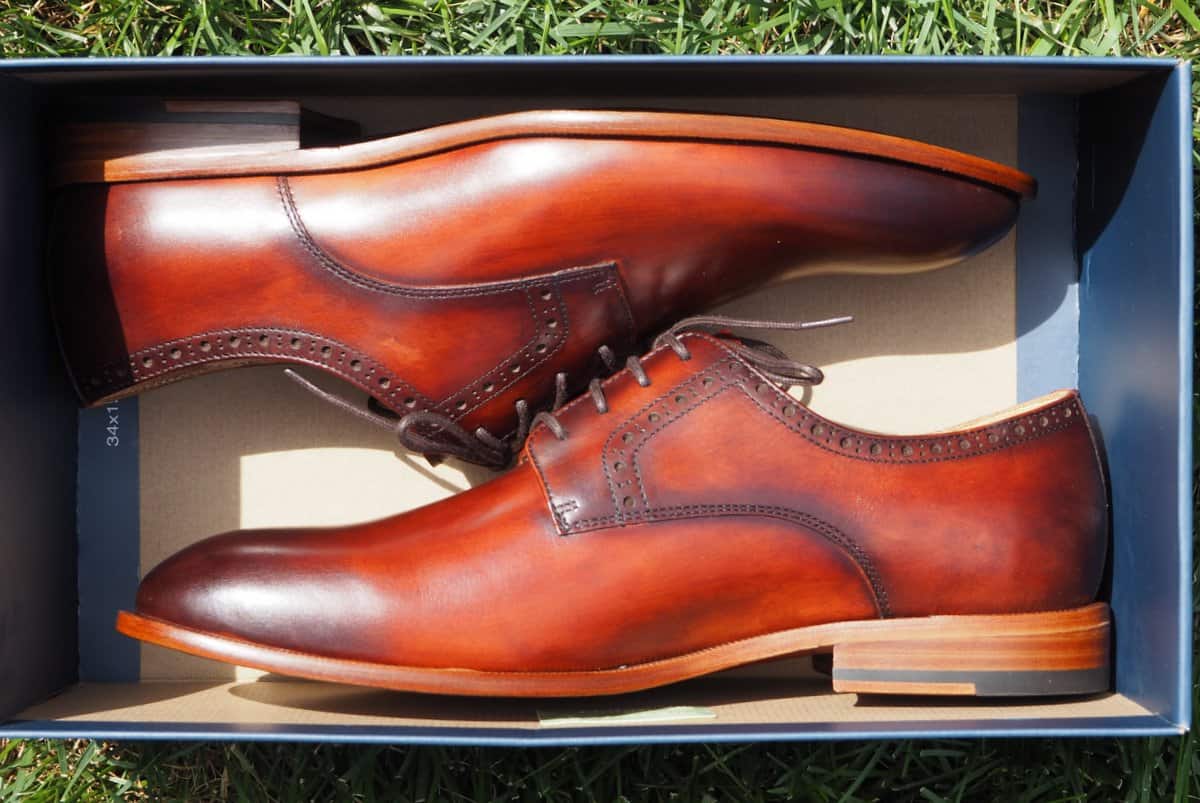 Startup Warfield and Grand is making exceptionally comfortable and stylish men’s shoes for the new normal at a surprisingly attractive price point. (Find out how to get 15% off.)

In Search of Comfortable-Yet-Stylish Shoes for Men

Since the pandemic, a stylish pair of office-appropriate shoes has been hard to find.

One of my favorite options for comfortable dress shoes for men, Wolf and Shepherd, flat out stopped making them to concentrate on hybrid sneaker-shoes and minimalist knit footwear.

Disclosure: Warfield and Grand provided samples at no cost for the purpose of a review.

About Warfield and Grand

McLain has worked in the footwear industry for nearly 20 years. At the University of California Santa Barbara, where he studied studio art, McLain recalls that, “I really got hooked on industry,” and he jumped into footwear retail soon after graduating.

“I’ve been fortunate to work for a handful of footwear companies that gave me exposure to design and manufacturing from high-end brands to producing large scale programs for major U.S. retailers,” McLain told me.

“At some point along the way I developed my own perspective for men’s footwear and it made more sense to create my own path instead of continuing to conform to someone else’s guardrails,” he added.

What Makes Warfield and Grand Shoes Stand Out?

I asked McLain how he differentiates Warfield and Grand in a crowded and uncertain retail environment. He responded that:

Certainly there is no shortage of brands in the market and the evolution of retail is creating tons of pressure on brands these days. However, we’re able to leverage a lot of experience and knowledge to stay ahead of the curve and continue to make some of the best quality products in our price category.

Being a lean company we don’t need to operate under high margin expectations. We’re able to offer components and constructions that are typically found in much more expensive shoes.

He added that, “we are a product first company that relies on old fashioned organic growth,” and acknowledged that they’re still figuring out how to break through the digital noise and get in front of customers.

How Much Do Warfield and Grand Shoes Cost?

Warfield and Grand’s shoes and sneakers start at $139 and rise to $219 for select boots. It is occasionally possible to find Warfield and Grand shoes for under $100 on sale via the company’s website or select retail partners, though sizes and quantities of those discounted shoes tend to be limited.

Modern Fellows readers can score a 15% discount off of Warfield and Grand’s lineup of shoes and sneakers for men purchased directly from the company’s website with code MODERN15.

Where to Buy Warfield and Grand Shoes and Boots

“We’re slowly investing into online presence,” McLain said, though “most customers first find us through distribution with our retail partners.”

The First Warfield and Grand Shoe You Should Try, According to Its Founder

I asked McLain what the first shoe he would recommend to someone who has never tried Warfield and Grand. He told me that, “we have a great plain toe derby that’s new to our collection called the Keller.”

The shoe features subtle perforation details and is available in a rich chestnut with a great depth in the finishing, which McLain suggested, works well with lots of outfits.

“It’s great for the office but a great shoe like this helps give you tons of confidence when navigating life,” he said. “Mixing it up with something dressy can give you a great boost.”

The soles of the Keller feature an attractive and sturdy leather outsole. McLain noted that “some guys can be intimidated by leather outsole shoes but once they break in they really feel different.”

“After two years of slippers and flip flops, I’m hopeful there will be an increased focus on personal appearance,” said McLain, making a dress shoe from Warfield and Grand a great place to start.

“With lots of companies exploring a hybrid remote/in person schedule, there is an increased importance in representing yourself well if you have limited interaction with your colleagues,” McLain observed.

He also pointed to Warfield and Grand’s dress loafers, like the Stewart penny, which have been hard to keep in stock. “Loafers have always been associated with comfort and maybe this is an easier first step back into work-wear,” he added.

In fact, the Keller is the first shoe I tried from Warfield and Grand’s collection.

Unboxing Warfield and Grand’s Keller shoes, which sell for $179, the first thing you notice is the burnishing. I opened the shoes outdoors, and the chestnut upper shone as the sunlight hit.

The lace-up oxford shoes for men are gorgeous, with tight Blake stitching knotting the sole to the upper, and attractive brouging along the quarter. Flip the shoes over, and you notice the stamped heel and a shiny leather outer sole.

Slipping on Warfield and Grand’s oxfords was easy, and the shoes were immediately comfortable. They do take a bit of breaking in, and you ought to walk around the house and the block with them for a bit before putting them on for a full day of work. But they weren’t overly rigid, and I walked for miles a day in them on a recent vacation.

I love the sturdy leather outsoles, though you should make sure to scuff them up lest you go flying on a slick kitchen floor.

So far, Warfield and Grand’s shoes, which are made in China, have held up well through miles of walking and 8-10 hour work days. I can’t speak to their longevity, but will update this piece once some more time has passed.

I also had a chance to review Warfield and Grand’s Grayson boots for men.

The Grayson boots are sturdy and substantial though, like the Warfield and Grand’s oxford shoes, also immediately comfortable.

I liked that the boots were easier to slip on than some other work boots I’ve tried in the past, and don’t require you to fully loosen the laces just to get your heels in them. The pull loop makes it easy to slip the boots on.

Retailing for $189, the boots are comfortable and easy to break in. While I wouldn’t wear them to work, the rich, hand-burnished leather and detailing make them a great smart casual option.

What’s Next for Warfield and Grand?

“It can’t get more exciting than new product!” says McLain. The company has already added 12 new styles to the Warfield and Grand collection. This fall will see the introduction of thirty new patterns and colors.

McLain also points the upcoming introduction of a new European dress last Warfield and Grand will be introducing on their Fleck Cap toe. He previewed that “we have a ton of exciting boots including the Tinley cap toe boot in an amazing burnished Italian calf.”

Verdict: A New Go-To for Comfortable, Stylish Shoes and Boots

As menswear brands continue the pandemic trend of casualizing guys’ wardrobes, I have been searching a long time for a men’s shoe brand that prioritized style and class alongside comfort and value.

Warfield and Grand’s shoes are exceptionally comfortable yet incredibly stylish, and feature impressive finishes and detailing at a surprisingly affordable price.

Warfield and Grand is an excellent example of a stylish direct-to-consumer menswear brand and one of my new favorite options for comfortable dress shoes for men.