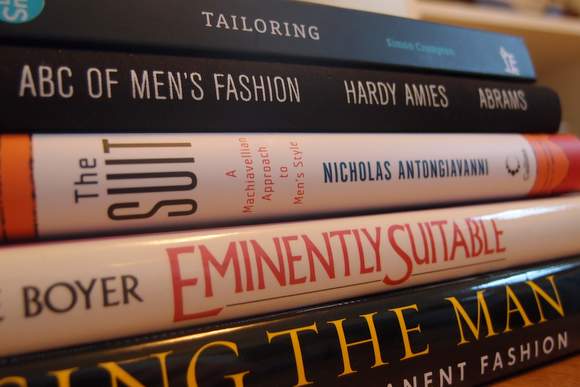 This post is an effort to explore what I consider to be the 16 best books on style and fashion for men from Hardy Amies to Flusser.

When I launched Modern Fellows in 2012, I did so because I was interested in getting to know the stories behind innovative brands helping men dress sharp in the digital age.

As I got to know more and more of these brands and entrepreneurs, I read up on the history of iconic brands like Brooks Brothers and took more of an interest in the amazing menswear bloggers, journalists, authors and experts who help men understand and appreciate fashion and style.

Here are 16 essential books that can help you discover more about menswear, fashion, history, brands and lifestyle:

“Icons” is a misleading name for a really sensational book. The word “icons” seems to suggest that this is another ode to James Dean, Sammy Davis Jr. or Beau Brummell. While these and other stylish guys make appearances throughout Sims’ 191-page tour, the real focus of the book is iconic menswear pieces from the tweed jacket to the driving shoe to the Mac. As GQ noted in its review, this is “not more McQueen, Grant, et al, but a history of hero pieces like the trench and brogues.” Highly, highly recommended. I keep this book on my bedside table and regularly leaf through it to remind myself of, say, the history of the necktie.

The Measure of a Man: The Story of a Father, a Son, and a Suit by JJ Lee

Published in 2011, Measure is not your typical guide to suit lapels and dress shirt collars. Lee weaves a history of the suit into a story about what it means to be a man that is at turns raw, sad and hopeful. I really enjoyed this book.

Dressing the Man: Mastering the Art of Permanent Fashion by Alan Flusser

Flusser is the reigning modern day authority on male style and dress. Dressing is equal parts history, photography, and diary of the rules of dress that quotes Oscar Wilde, places Gordon Gekko in historical context and walks the reader through how to tie a bow tie. Fluuser even does a good job with contextualizing “dressed-down business casual” outfits (albeit through a pre-COVID lens).

Fashion experts Steven Vogel, Nicholas Schonberger and Calum Gordon profile 50 brands that have been innovating in menswear over the past decade including Engineered Garments and Gitman Bros.  An excellent tour of independent menswear.

I’ve long been a fan of Brooks Brothers’ history. It’s hard to overemphasize the lasting contributions that the innovative company shaped modern American style.  Published in 2017, Kate Betts, a contributing editor to the Daily Beast and Time, provides a great tour of Brooks Brothers’ history and the ways in which it ported and Americanized British fashions for a U.S. audience.

While oversized coffee-table books are often more for show than for reading, Musgrave blends a pictorial history of men’s fashion with eight thoughtful narratives that trace the history of the suit and how men have adapted it throughout the years.

Boyer’s excellent history of men’s dress takes readers from English philosopher Herbert Spencer’s and American economist Thorstein Veblen’s treatment of style at the turn of the 20th Century down through American and European designers of the 1980s. While a little dated in spots — Raleighs, “the capital’s department store of menswear” referenced by Boyer that used to reside at 1133 Connecticut Ave. NW, closed in the early 1990s — the text-heavy book is an engaging read.

True Style, Boyer’s latest, is a collection of reflections about menswear, through which his trademark appreciation of history continues to flow.

Because Sir Hardy’s quote that, “A man should look as if he has bought his clothes with intelligence, put them on with care and then forgotten all about them” is deservedly famous.

Simon Crompton’s slim volume hits many of the same notes as other guides to men’s style, starting from very basic concepts such as the differences between bespoke, made-to-measure and off the rack suiting. Tailoring stands out through a series of “words from the wise” — vignettes featuring English entrepreneurs like Patrick Murphy, the Head Cutter at Huntsman UK, and Michael Drake, the founder of Drake’s UK.

Esquire Fashion Guide For All Occasions (1957)

Esquire’s 1957 guide is a reminder that much has changed in the world of menswear and yet much remains the same.

The Suit: A Machiavellian Approach to Men’s Style

The author’s faux-haughty style can wear at times, but The Suit delivers useful knowledge, great quotes, and occasionally funny commentary.

Published in May 2018, the Parisian Field Guide to Men’s Style is a contribution of Paris Chic author Ines de la Fressange to menswear.  It may be a little overwrought at times, with prescriptions for style “don’ts” and warnings of outdated outfits, but the book really shines with its guide to menswear stores. While most of the stores are in Paris, many have an online presence and ship globally.

Dress Like a Man: A Style Guide for Practical Men Wanting to Improve Their Professional Personal Appearance

Effortless Outfits: The Men’s Guide to Matching Clothes for Powerful Impression in Personal and Professional Life

Antonio Centeno (“Dress Like a Man”) and Rob van Tongeren (“Effortless Outfits”) are two well-respected bloggers who have Kindle books out on Amazon. Each, in his own way, produces a guide to help men feel more confident in the clothes they buy and in laying out outfits from their closets. Both authors also offer a free look inside their books on Amazon, so you can start reading before you decide whether it’s worth plunking down some money.