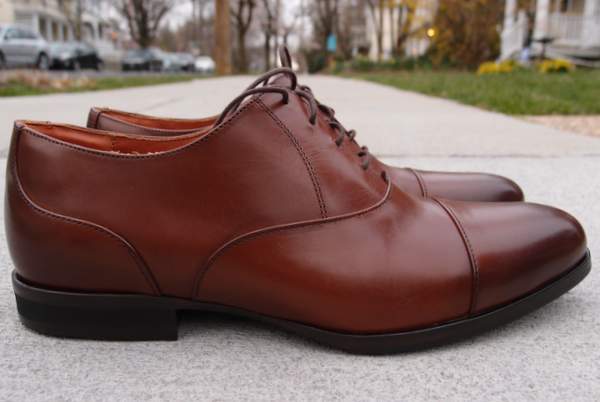 Find out how Wolf and Shepherd’s Closer cap-toe lace-up oxfords performed after more than two years of heavy use in this updated review.

Too often, spectacular-looking dress shoes sacrifice comfort for style, while the few comfort-focused brands out there leave a lot to be desired in the looks department.

This updated article builds upon my review of Wolf and Shepherd’s cap-toe oxfords and interview with founder Justin Schneider that I first published in May 2018.

Since then, Wolf and Shepherd has pivoted away from traditional dress shoes to focus heavily on their striking and unique Longwing hybrid dress shoes and their versatile Swiftknit Derby crossovers.

These comprise a new category of shoes that are great for pairing with stylish business casual outfits for men, but have left me in search of a new favorite option for comfortable dress shoes.

Read on for an overview of Wolf and Shepherd, my initial impressions of their comfortable dress shoes and additional thoughts on their durability after wearing them to and from work for more than a year.

Also check out my review of Wolf and Shepherd’s Bannister Derbies, which are another option for comfortable dress shoes for the new normal.

Wolf and Shepherd provided a pair of shoes at no cost for the purpose of this review.

In the summer of 2014, a friend called up Wolf and Shepherd founder Justin Schneider, pictured below, to say that his dress shoes were so uncomfortable that he had to take them off while sitting at his desk and wear sneakers to and from work to avoid having them on longer than he needed to. “This seemed to be a consistent problem among my peers,” Justin told Modern Fellows.

He started cutting up shoes and gluing sneaker insoles to dress shoe uppers. “By the end of that year, I had a working prototype of a classic dress shoe with an innovative foam sole,” Justin recalls. From there, he found a factory in Portugal, identified the suppliers, including a top-of-the-line Italian leather company, and developed a proprietary, patent-protected foam. The company launched a pre-sale campaign in July 2015 for their comfortable dress shoes and was off-and-running, adding new styles, refining its technology, and ramping up ever since.

The brand received a nice pop of media coverage after runner Juris Silenieks set a new world record by running the Hotlanta half marathon in Wolf and Shepherd’s dress shoes.

What’s So Special About Wolf and Shepherd’s Shoes

Having walked around the streets of Washington, DC for the better part of two months in the pair of cap-toe lace-up oxfords the company sent over, it’s clear that Wolf and Shepherd has nailed a near-perfect combination of good looks, comfort and craftsmanship.

In terms of comfort, while the shoes took about 3 wearings to break in and feel truly my own, since then, they have felt about as good as sneakers walking around the city. (Pro tip: Wear the shoes around the house or for a couple of quick outings to break them in.) I wore them to take Flat Stanley on a long adventure past the White House and Washington Monument, on an 11-hour day spent mostly on my feet at work, and while sloshing through an unusually long bout of rain in the DMV.

They’re lightweight — about a pound lighter than most other dress shoes, according to the company — and boast a bevvy of technologies in their multiple insole layers from high-density foam heel adapted from athletic shoes to carbon-fiber arch support and sheepskin lining in the upper-most layer.

All of that technology is housed in a pair of shoes that look professional and sleek with just a little bit of flair. The slight burnishing of the maple Italian calfskin on the toes (pictured above) is a nice touch, as is the tiny eyelet at the top of the laces (pictured below).

I received two compliments in two days on my shoes, including one from a stranger on K Street.

Structurally, the leather has held up well and hasn’t cracked or crumpled, as has happened to cheaper oxfords I’ve worn the past. (See below for a picture of what the shoes look like after 8 weeks of heavy use.) The shoes are not Goodyear welted but rather Blake welted and cemented.

A nice feature is that the shoes’ forefoot and heel can be resoled, potentially extending the life and look of the shoes.

All of this comfort, style and technology comes at a price. Retailing for $345, Wolf and Shepherd’s oxfords might be best classified as “affordable luxury.” While they aren’t cheap, they are in line with traditional brands like Allen Edmonds.

One note: While I reviewed oxford lace-ups, Wolf and Shepherd offers a range of boots, loafers, driving shoes, Crossover Longwings and Swiftknit derbies as well. Given how comfortable the oxfords were, I’d be willing to bet that their suede Gunner Driver shoes would feel like putting on a pair of slippers.

Justin, who was named to the Forbes 30-under-30 list for retail and e-commerce in 2017, says the company’s focus and DNA have remained the same from Day One: “producing the most comfortable, stylish men’s dress shoes with premium quality and classic heritage.”

Reviewing the Durability of Wolf and Shepherd Shoes after One Year

As a consumer, it’s often hard to know what to make of product reviews that feature perfectly-glossy photos of just-unboxed gear. After weeks, months and years, clothes and shoes wear and colors fade, yet some products hold up better than others.

The pictures in this section depict the same cap-toe lace-up oxfords I reviewed in May 2018 after a year of wear.

These shoes have held up remarkably well to everything that I’ve thrown at them, from downpours in DC through to multiple-mile walks through muggy Manila.

Critically, they are still waterproof and the soles haven’t opened to the elements.

After more than a year of heavy use, these shoes have proven their value.

The company’s core business is direct to consumer e-commerce — though their shoes can also be found at select menswear stockists — so Wolf and Shepherd has to stand out online and find ways to give confidence to potential customers to make a significant purchase online.

For one, Wolf and Shepherd allows returns for a refund or exchange within 30 days of the shipping date, and domestic (U.S.) returns are free of charge.

Justin says that, “what we’ve learned most from our customers is to listen to them about what next steps we need to take as a company.”

We take their feedback very seriously. They guide our product decisions, let us know if our storytelling is resonating, help determine what markets we should nurture and get a foothold in, and communicate if we’re positively impacting their lives. Listening to them is paramount to our business.

What’s Next for Wolf and Shepherd

What’s next for the startup brand? Justin told me back in 2018 that, “we’re currently in a growth phase, so the next year is critical as we look to scale and evolve.”

Since then, Wolf and Shepherd released the bold (and I think uniquely good-looking) Cross-over Longwing, a hybrid sneaker with a leather dress upper that they developed with basketball legend Steve Nash.

I had a chance to review the Longwing crossover by Wolf and Shepherd, which is distinctive and maybe not for everyone, but it’s definitely not boring.

For example, the company added soft driving shoes, traditional leather sneakers and belts to its online offerings, along with the Longwing Crossovers.

Wolf and Shepherd has also expandd its line of crossovers, debuting a wingtip hybrid dress shoe, a hybrid penny loafer and Crossover boots.

The company has further expanded its line of hybrids with a 3D-printed knit upper known as Swiftknit Derbies (pictured above). I particularly like the look of the Swiftknit, which is part of a new category of minimalist woven knit shoes and sneakers offered by brands like Allbirds and Vessi.

“Ultimately, we want to be more than a go-to shoe for men; we want to be a go-to brand for style, quality and performance,” he added.

11 thoughts on “Reviewing Wolf and Shepherd (2022): After More than a Year of Use, See Why These Dress Shoes Remain the Ultimate Combination of Style and Comfort”